One of rock's most seminal works is being celebrated via an upcoming release courtesy of Eagle Rock Entertainment... 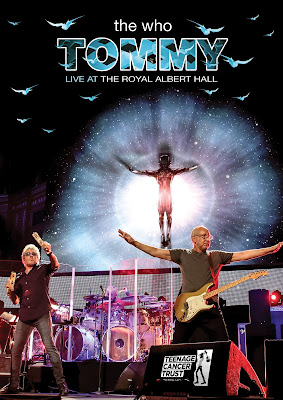 New York, NY (August 17, 2017)—On October 13, 2017, Eagle Rock Entertainment will release Tommy – Live At The Royal Albert Hall by The Who on DVD, Blu-ray, 2CD and 3LP [MSRP $15.98 DVD, $21.98 Blu-ray, $19.98 2CD, $39.98 3LP]. This unbelievable concert film captures the first-ever live performance by The Who of Tommy in its entirety and boasts over two hours and twenty minutes of content. The show includes all-time classics like “Pinball Wizard”, “I’m Free”, “Amazing Journey”, “We’re Not Gonna Take It”, “I Can’t Explain”, “Who Are You”, “Won’t Get Fooled Again”, “I Can See For Miles”, and many more!
In April 2017, The Who took to the stage at London’s Royal Albert Hall to perform their rock opera Tommy live in its entirety for the first time in their long and illustrious career. Previous Who live shows had always dropped two, three or four tracks from the album, but for this show, in aid of the Teenage Cancer Trust, the band would perform every track. With specially created animations on a huge screen above the stage and creative use of lighting, the concert told the story of the “deaf, dumb and blind kid who sure played a mean pinball.” In addition, at the end of Tommy, the sell-out crowd was treated to a short set of Who classics. Always a great live band, this performance was a thrilling ride from start to finish.
As well as the incredible full show, Tommy – Live At The Royal Albert Hall includes some great bonus features: a behind-the-scenes featurette, plus full screen animations of both “The Acid Queen” and “Pinball Wizard” with the live performance audio.
This concert film captures some of their greatest work, breathtakingly staged and fully live in full for the first time ever, at an iconic venue. Tommy – Live At The Royal Albert Hall is absolutely unmissable for any fans of The Who.
PRE-ORDER ON AMAZON
CD: https://www.amazon.com/Tommy-Live-Royal-Albert-Hall/dp/B0746XTX18
Blu-ray: https://www.amazon.com/Tommy-Live-Royal-Albert-Blu-ray/dp/B07472V1D9
DVD: https://www.amazon.com/Tommy-Live-Royal-Albert-Hall/dp/B07477ZM3B
Vinyl: https://www.amazon.com/Tommy-Live-Royal-Albert-Hall/dp/B07472TY5L
TRACK LISTING
1) Introduction
2) Overture
3) It’s A Boy
4) 1921
5) Amazing Journey
6) Sparks
7) Eyesight To The Blind (The Hawker)
8) Christmas
9) Cousin Kevin
10) The Acid Queen
11) Do You Think It’s Alright?
12) Fiddle About
13) Pinball Wizard
14) There’s A Doctor
15) Go To The Mirror!
16) Tommy Can You Hear Me?
17) Smash The Mirror
18) Underture
19) I’m Free
20) Miracle Cure
21) Sensation
22) Sally Simpson
23) Welcome
24) Tommy’s Holiday Camp
25) We’re Not Gonna Take It
26) I Can’t Explain
27) Join Together
28) I Can See For Miles
29) Who Are You
30) Love, Reign O’er Me
31) Baba O’Reilly
32) Won’t Get Fooled Again
Posted by Robert Kinsler at 7:33 AM