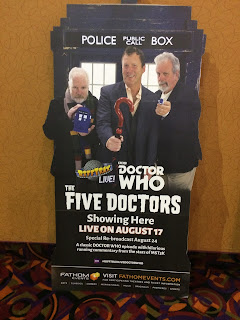 NEXT: Thursday, August 24; 7:30 p.m. local time
WHERE: Tickets for “RiffTrax Live: Doctor Who – The Five Doctors” can be purchased online by visiting www.FathomEvents.com or at participating theater box offices. Fans throughout the U.S. will be able to enjoy the event in select movie theaters through Fathom’s Digital Broadcast Network (DBN). For a complete list of theater locations visit the Fathom Events website (theaters and participants are subject to change).


The recent high-profile, successful return of Mystery Science Theater 3000 - better known as MST3K – is no surprise. When the original series ended in 1999 after more than a decade of thrilling television audiences, three of the key members of the original groundbreaking series carried on the brash brand of "riffing" (where they humorously comment on movies with well-timed digs and asides that are usually more entertaining than the films themselves) via the developing ability for audiences to stream video and complete downloads at home.

RiffTrax has been so successful, that the celebrated RiffTrax team featuring Michael J. Nelson, Kevin Murphy and Bill Corbett has been featured in a series of more than two dozen special movie theater screenings .

Most recently, the trio are featured in "RiffTrax Live: Doctor Who – The Five Doctors" that was shown in movie theaters across North America last night (Aug. 17, 2017), and returns for a repeat performance to movie houses across the continent at 7:30 p.m. on Thursday, Aug. 24, 2017.

Yours truly was at the screening last night, and this was truly an entertainment experience that is the perfect blend of sci-fi heaven and smart comedy that was established during MST3K's initial run. With the cooperation of BBC, RiffTrax is able to riff throughout a theaterical showing of a special 1983 episode produced to celebrate the 20th anniversary of the enduring British sci-fi series "Doctor Who." The full-length episode is beloved by fans of the BBC series, but that doesn't mean Nelson, Murphy and Corbett can't get in plenty of their witty commentary in during the screening. In fact, you wouldn't have to be familiar with RiffTrax or Doctor Who to enjoy this experience.

I didn't take detailed notes during the screening; it was dark and I was having far too much fun laughing (and I am thankfully not one of those idiots who turn on their cell phone when I am in a darkened theater...). But any screening where the far-flung likes of "Dark Shadows," "Buddy Holly," the Cleveland Browns' struggles (the team hasn't had a winning season since 2007), Christopher Lee, The Three Stooges, "Downton Abbey" and even Neville Chamberlain fit nicely into the comedic arc is a good reason to catch this in theaters next Thursday (Aug. 24, 2017).

Oh, and arrive early. For the 30 minutes preceeding the film there were funny title cards blending more of the intelligent RiffTrax humor amidst a mixtape featuring songs from not only the RiffTrax cast, but "Weird Al" Yankovic and They Might Be Giants.

Posted by Robert Kinsler at 8:23 AM