It's only Tuesday, but it is unlikely anything is bigger news than the announcement today that Chuck Berry (who turns 90 today) is going to release his first album in 38 years! 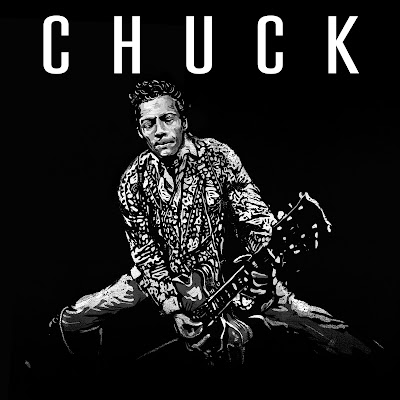 Chuck Berry, the artist who codified the sound, rhythm and language of rock and roll, celebrated his 90th birthday today with the surprise announcement that he will release a new album - titled simply CHUCK - in 2017 on Dualtone Records (an Entertainment One Company). Comprised primarily of new, original songs written, recorded and produced by the founding rock and roll legend, CHUCK is Berry's first new album in thirty-eight years. It was recorded in various studios around St. Louis and features Berry's longtime hometown backing group - including his children Charles Berry Jr. (guitar) and Ingrid Berry (harmonica), plus Jimmy Marsala (Berry's bassist of forty years), Robert Lohr (piano), and Keith Robinson (drums) - which has supported him for over two decades on over two hundred residency shows at the famed Blueberry Hill club. More details about 'CHUCK' and other Berry-related events will be revealed in the coming weeks.

"This record is dedicated to my beloved Toddy," said Berry, referring to his wife of 68 years, Themetta Berry. "My darlin' I'm growing old! I've worked on this record for a long time. Now I can hang up my shoes!"

"What an honor to be part of this new music," says Charles Berry Jr. "The St. Louis band, or as dad called us 'The Blueberry Hill Band,' fell right into the groove and followed his lead. These songs cover the spectrum from hard driving rockers to soulful thought provoking time capsules of a life's work."

Dualtone president Paul Roper adds: "It is a great honor to be a part of this record and the broader legacy of Chuck Berry. This body of work stands with the best of his career and will further cement Chuck as one of the greatest icons of rock and roll."
It would be impossible to overstate Chuck Berry's influence on popular culture around the globe (and beyond it). According to Rolling Stone magazine he "laid the groundwork for not only a rock and roll sound but a rock and roll stance," and many of his compositions - "Maybellene," "Roll Over Beethoven," "Rock and Roll Music" and others - have become the genre's canonical texts. Another, "Johnny B. Goode," is the only rock and roll song included on the Voyager Golden Record, launched into space in 1977, and intended to represent life and culture on Earth to extraterrestrial beings.
Berry received a Grammy Lifetime Achievement Award in 1984, and was in the inaugural class of Rock and Roll Hall of Fame inductees in 1986. He was awarded a Kennedy Center Honor in 2000, placed #5 on Rolling Stone's list of the 100 Greatest Artists of All-Time in 2010, and was given the first-ever PEN Award for literary excellence in lyric writing in 2012. More recently, he was the subject of a widely discussed essay by author Chuck Klosterman predicting that hundreds of years hence, Berry would be singularly synonymous with rock and roll itself, and last month his classic 1973 red Cadillac Eldorado went on display as part of the permanent collection at the Smithsonian's new National Museum of African American Culture and History.