Whew! I am still playing "wake up" after catching the incredible performance from Radiohead last night at the Shrine in Los Angeles. Here are several big news items to catch everybody up with... 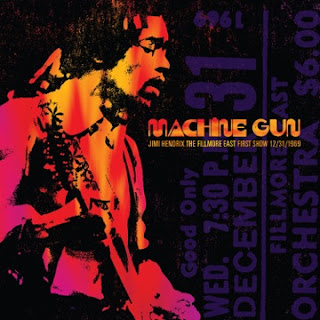 Historic Debut Concert of Band of Gypsys to Be Released in its Entirety For First Time Ever
August 9, 2016- New York, NY- Experience Hendrix L.L.C. and Legacy Recordings, the catalog division of Sony Music Entertainment, are releasing Machine Gun: The Fillmore East First Show 12/31/69, fully documenting the debut performance of Jimi Hendrix’s short-lived but eternally influential Band of Gypsys on September 30. The group played four historic concerts at the Fillmore East in New York City – two on New Year’s Eve 1969, and two on New Year’s Day 1970. Never before has the first of these sets been available in its entirety. The vast majority of the performances have never seen the light of day in any configuration.

While promoter Bill Graham had advertised the concerts as ‘Jimi Hendrix: A Band Of Gypsys’, few could have anticipated what Hendrix had in store. “We had two shows New Years Eve and two shows New Years Day,” remembered Cox. “We didn’t know what to expect from the audience and the audience didn’t know what to expect from us, but from the time we hit that first note, they were in awe. You had Jimi Hendrix, a drummer who had been with the Electric Flag and Wilson Pickett, and I was the new kid on the block.”

With the anticipation of the sold out Fillmore audience heightened to fever pitch, Hendrix led his trio through a scintillating, seventy-five minute opening performance. None of the eleven songs presented had yet to grace an Experience album. In the place of signature songs like “Purple Haze” and “All Along The Watchtower” were confident renditions of “Power Of Soul” and “Hear My Train A Comin.’”

Jimi generously extended center stage to Buddy Miles, providing a showcase for “Changes” and a charged rendition of the Howard Tate R&B hit “Stop”. “We had rehearsed “Changes” and a few others for Buddy,” explains Cox. “All of the songs we performed had been rehearsed. We didn’t look at it as Buddy’s part of the show. We were all there to give. We were all there to help and material went on whether it was written by Jimi or not.” Former Rolling Stone senior editor David Fricke, who authored this collection’s liner notes, describes “Stop” as being something akin to “a psychedelic power-trio Temptations.” Hendrix’s scalding version of Elmore James’ “Bleeding Heart” is the set’s only other cover, underscoring the new band’s emphasis on the blues.

As the Fillmore audience roared with approval, the Band Of Gypsys left the stage confident that they had validated Jimi’s new music before his loyal followers. “After the gigs were finished, Jimi was quite relieved,” remembers Cox. “We felt the concerts went well. I might add that in previous gigs with the Experience he had used a fuzz face [tone control pedal] and a Wah-Wah pedal, then at Woodstock he used a fuzz face, Wah-Wah pedal and Uni-Vibe, but at the Fillmore East he used a fuzz face, Wah-Wah pedal, Uni-Vibe and Octavia and it was incredible. In fact you could hear all of it kicking in on ‘Machine Gun.’ It was incredible. There were people in the audience with their mouths open.”

“Machine Gun” stands as one of Hendrix’s finest and most influential compositions. Hendrix pushed Delta blues into places its pioneers could not have imagined, fusing his extraordinary instrumental skills within his passionate expression of man’s inhumanity to his fellow man. “Machine Gun” endures as a classic amongst the already classic-drenched Jimi Hendrix canon. Fricke notes of this version, the first that Hendrix and company had ever played in concert, “..Here it is, after 46 years, another revelation – a stunning essay in pain, rage and determined survival, fully formed in its initial outing.”

Long sought after by the guitarist’s worldwide following, Machine Gun: The Fillmore East First Show 12/31/69 presents the complete performance in its original sequence.
Machine Gun: The Fillmore East First Show 12/31/69 documents the first of the group’s four legendary Fillmore East concerts. This set presents an assortment of fresh, exciting new songs such as “Earth Blues,” “Ezy Ryder,” “Stepping Stone,” “Burning Desire,” and “Machine Gun”—none of which had ever before been issued on disc. Moreover, nearly all of the group’s material had never been performed before an audience. “We decided that we couldn’t do any songs that had already been released,” explains Billy Cox. “We wanted to give them something different. So we went at the project in a joyous, creative posture and ultimately developed the repertoire of the Band of Gypsys.”
Jimi Hendrix – Machine Gun: The Fillmore East First Show 12/31/69 (release date: September 30) 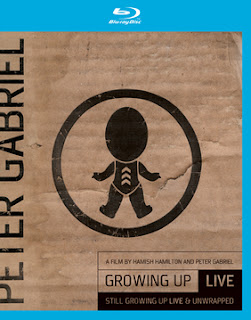 The “Growing Up Live” concert film was recorded on the tour of the same name from 2002/3 and boasts key tracks Sledgehammer, In Your Eyes, Solsbury Hill, Digging In The Dirt, More Than This, Red Rain, Growing Up, Mercy Street, Here Comes The Flood and more.  “Still Growing Up Live & Unwrapped” includes the concert film of the Still Growing Up tour from 2004 and the “Unwrapped” film (both shot in standard definition), which give a more intimate look at Peter Gabriel on tour and explore the world behind the songs featured in the shows. The Blu-ray+DVD set has all the material from these three DVD discs included on one Blu-ray disc and one DVD. Also included on the Blu-ray disc is the Family Portrait film.
In 2002 and 2003, following the release of his album “Up”, Peter Gabriel went on the road with his “Growing Up” tour, once again collaborating with production designer Robert Lepage to create a spectacular and theatrical live experience. The tour took in thirty-two cities across the USA, Canada and Europe with this concert film, directed by Hamish Hamilton, being shot over two nights at the FilaForum in Milan in May 2003 with Peter Gabriel and the band performing “in the round” at the center of the arena. Filmed in high definition, this was originally released on DVD in 2003 but never on Blu-ray. The DVD is now being reissued and the concert is being released on Blu-ray for the first time. 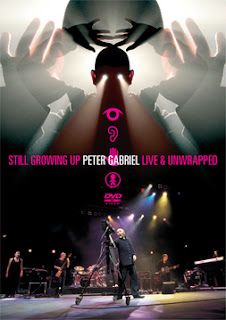 “Still Growing Up Live & Unwrapped” is taken from the “Still Growing Up” tour of 2004, which took Peter Gabriel and his band into smaller and more intimate venues in contrast to the large arenas chronicled in the “Growing Up Live” film. Award-winning director Hamish Hamilton reunites with Peter Gabriel for this concert film. The ‘Unwrapped’ film sees Anna Gabriel take over the director’s chair with the collaboration of Hamish Hamilton. A simpler approach suggested a different set list and Peter, Hamish and Anna were determined that this should be filmed in a very different style. It shows Peter Gabriel as many of his fans love to see him, just playing the music.
For the Blu-ray+DVD edition “Growing Up Live” is presented in high definition for the first time on the Blu-ray disc. Also on the Blu-ray disc in standard definition are the “Unwrapped” film and its bonus features and, as an added bonus, Anna Gabriel’s previously unreleased film “Growing Up On Tour – A Family Portrait” has also been included. The DVD in this set contains the “Still Growing Up Live” film and its bonus features.
“Growing Up Live” + “Still Growing Up Live & Unwrapped” are important films that capture one of our most innovative and best loved artists at his very best.
View “Sledgehammer” here: http://bit.ly/2b31F6E
Pre-order here:
Growing Up Live & Unwrapped + Still Growing Up Live - https://www.amazon.com/dp/B01IHVHGFU
Still Growing Up Live & Unwrapped - https://www.amazon.com/dp/B01IHVHFQK
Eagle Rock Entertainment is the world’s largest producer and distributor of music programming for TV, DVD, Blu-Ray and Digital Media. Eagle produces quality HD programs, both concerts and documentaries, directly alongside artists including Imagine Dragons, Paul McCartney, Katy Perry, The Rolling Stones, Pink Floyd, The Who, Queen, and Peter Gabriel. Eagle is a multiple Grammy® Award winner and has received numerous multi-platinum sales awards around the world.  Eagle Vision is headquartered in London, and is a Universal Music Group company.
Follow Eagle Rock Entertainment at:
Facebook:  www.facebook.com/EagleRockEnt
Twitter: www.twitter.com/EagleRockNews

The Pretty Reckless announces 'Who You Selling For' due out October 21, 2016 via Razor & Tie
FIRST SINGLE "TAKE ME DOWN" OUT NOW
US TOUR DATES THIS FALL

After topping the rock charts in 2014 and 2015, The Pretty Reckless returns with their extraordinary third studio album Who You Selling For, due October 21st on Razor & Tie. The new album is the band's anticipated follow up to Going To Hell, which spawned the biggest rock song of 2014 in "Heaven Knows" and a total of three #1 Mainstream and Active Rock hits. The first single from the new album, "Take Me Down," premiered worldwide July 15th on iHeart Radio and impacted at rock radio four days later on July 19th, quickly climbing to #7 on the chart. Listen to the new single HERE.
Produced by longtime collaborator Kato Khandwala, Who You Selling For is an arresting collection of rock tunes that expand the band's sound to encompass soulful, bluesy undertones, written by front woman Taylor Momsen and guitarist Ben Phillips. This raucous 12-track collection puts Momsen's dark lyrics and raw, charismatic vocals on full display while the band delivers at full intensity with a level of musicianship that raises the bar.
Formed in 2009, The Pretty Reckless released their debut album Light Me Up in 2010 scoring legions of fans worldwide, but it was their sophomore record Going to Hell that positioned the band to become the first new artist to breakout of rock in years, debuting in the Top 5 on Billboard's Top 200.  Achieving three #1 Rock hits - "Heaven Knows," "Fucked Up World" and "Follow Me Down" - was a feat that has not been accomplished by a female fronted group since The Pretenders in 1984, nearly a quarter of a century ago.
Despite feeling the physical and emotional demands from their epic two-year run supporting Going to Hell, Momsen and Phillips jumped right into writing the songs for the new album. "We had so much we wanted to say, it was like shaking a can of soda on tour, and then when we started writing we cracked the seal," says Momsen. "The touring life is very isolating. You look at the world through a bus or airplane window. But music is the healing factor. It's the one thing that is grounding and a true companion through the forest. It saved us - again."
With Who You Selling For the band continues to take bold steps forward, cementing their place at the forefront of rock. The deeply personal album features a diverse set of standout tracks, from the blistering hard rock of "Oh My God" to the classic southern rock of "Back to the River". Lead single"Take Me Down" features Taylor's distinctively smoky voice rolling over '60s - tinged rock guitar.Loudwire says, "'Take Me Down' features a bit of rasp and a soulful delivery from Momsen, while guitarist Ben Phillips gets a solid mid-song riffing showcase that raises the track to a new level.  Add in some backing organ playing and you've got a blistering new song from the band."
The band will hit the road this fall in support of the album and will run through major US cities such as Chicago, New York and Nashville before wrapping on December 6th in Los Angeles. Tickets go on sale to the public Friday August 12th at 10 AM local time. Please visit The Pretty Reckless for complete info.
theprettyreckless.com
Posted by Robert Kinsler at 8:30 AM