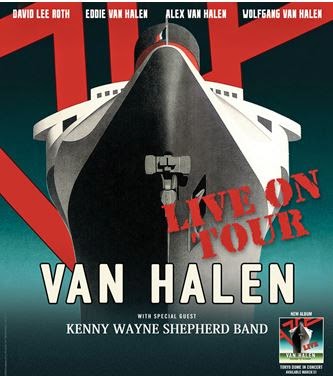 VAN HALEN is touring North America beginning July 5 in Seattle, Washington at the White River Amphitheatre, with concerts scheduled through October 2 in Los Angeles, California at the legendary Hollywood Bowl. Special guest Kenny Wayne Shepherd Band will support all dates along the tour. Tickets for the Live Nation-promoted tour go on sale beginning April 4 at www.ticketmaster.com and www.livenation.com with special pre-sale information being announced locally. A complete list of tour dates can be found below.

The special Hollywood Boulevard concert will be a hit-heavy set of songs featured on TOKYO DOME LIVE IN CONCERT, the first-ever live album to feature original singer David Lee Roth. Recorded on June 21, 2013 in Tokyo, Japan, TOKYO DOME LIVE IN CONCERT includes 23 songs spanning all seven of the band’s albums with Roth. It is being released as a double CD, four-LP set on 180-gram vinyl and digitally beginning March 31,

2015. Fans who pre-order TOKYO DOME LIVE IN CONCERT before its March 31 release date through Amazon and digitally at iTunes will instantly receive downloads of “Panama,” “Runnin’ With The Devil,”  “Jump” and “Hot For Teacher.”

Also being released beginning March 31 are remastered versions of Van Halen and 1984, with remastered versions of Diver Down, Women and Children First, Van Halen II and Fair Warning due out later this spring. Each album has been cut straight from the quarter-inch tapes for CD, 180-gram vinyl and for the digital version by mastering engineer Chris Bellman, who remastered the original albums for Bernie Grundman Studios, Hollywood, CA. These albums are being released beginning March 31 with pre-orders available now through Amazon and iTunes now.

Formed in Los Angeles in 1974, VAN HALEN changed the rock and roll landscape forever with the release of their self-titled, 1978 debut album and subsequently produced a repertoire of hits that remain some of the strongest and most influential rock songs ever written that fans will admire for decades to come. With more than 75 million albums sold worldwide, and more No. 1 hits on the Billboard Mainstream Rock chart than any other artist, the band's record of achievement is hard to top. The eponymous debut album and 1984 were both certified Diamond, for U.S. sales in excess of 10 million, placing them on an elite short list of double RIAA-certified Diamond Award honorees. VAN HALEN was inducted into the Rock and Roll Hall of Fame in 2007.

Go to http://van-halen.com/ for updates and more information.