David Crosby back on track with five-night run

My review was originally posted on The Orange County Register site on Tuesday, April 15, 2014.

Delayed because of surgery, his Troubadour stand finds the legend rebounding beautifully, revisiting history while showcasing his first solo album in two decades. 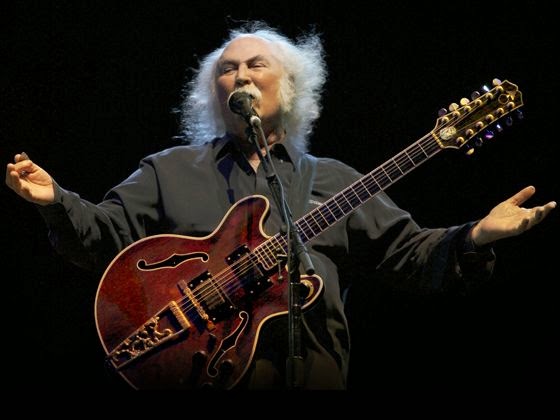 David Crosby scored all kinds of high points just for walking on stage Sunday night (April 13, 2014) at the Troubadour.
Back in February, he postponed a five-night solo run at the West Hollywood landmark to undergo emergency heart surgery. Yet here he was, a mere two months, later performing a full-length concert that didn't cut any corners.
Indeed, the 72-year-old folk and rock legend has had a number of well-publicized health issues in the past, including, most famously, a liver transplant in 1994. While he looked thin and at times tired over the course of his 150-minute concert, the multiple standing ovations that followed the rousing one that erupted when he stepped into view a couple minutes after 8 p.m. were soundly earned.
At this kickoff show, Crosby still proved capable of delivering new and classic material with emotional power and grace. The first of two sets found him and an amazing five-man band performing his latest album, Croz, from start to finish. Released in January, it's not only the Los Angeles native's first solo work in 20 years but boasts some of the most powerful songs he has recorded. (Its Top 40 debut on Billboard's albums chart also marks the first time he's been ranked on that list as a solo artist since his 1971 cult classic If I Could Only Remember My Name.)
After opening with "What's Broken," a piece built on the Laurel Canyon folk-rock feel so associated with Crosby's legacy, subsequent material expanded on that soundscape with jazz, heavier rock and psychedelic elements. His excellent players – notably guitarists Shane Fontayne and Marcus Eaton as well as the star's son, keyboardist James Raymond – all added magical textures and dynamics throughout.
Crosby also was in a particularly wry mood Sunday evening. "I had a body shaped like an avocado and I was really comfortable with it," he mentioned with regard to his thinner appearance. "I got sick and stopped eating," he explained, but quipped that he can tuck in his shirt now.
The focus of the night, however, was justifiably on his music. The hard acoustic rocker "The Clearing" featured an especially stirring bridge with peaks and valleys of music magic bookending confessional lyrics: "This kind of love don't need a home / This kind of heart beats all alone / This kind of world, gonna let it go / Lay down the things that came before." The audience (including Jackson Browne, spotted in the balcony) was enthusiastic but collectively reverent while he was performing.
As he promised at the outset, the second set included songs the audience knew. "Eight Miles High" started that off, with Crosby summoning strength on electric guitar as Fontayne worked his 12-string Rickenbacker with cascading and shimmering lines that brought that classic's distinctive sound back to life.
"This is where we met and put together the Byrds," Crosby pointed out, noting the importance of the Troubadour after the song. He then mentioned that another member of that seminal band was in the house – and out came Chris Hillman, who added: "I don't think I've been on this stage for 40 years."
The old friends then led the ensemble through an evocative version of "Turn! Turn! Turn!," another enduring Byrds staple that Crosby pointedly dedicated to its originator, folk icon Pete Seeger, who died in January. After the song was luxuriously performed, with lush vocal harmonies, Crosby and Hillman hugged as the audience applauded.
The headliner then proceeded to highlight material from both Crosby, Stills & Nash and his oft-overlooked '90s project CPR (including Raymond and guitarist Jeff Pevar). Highlights came one after another, from little-heard gems like the jazz-rock tune "That House" to heavyweights from his glory days, notably "Guinnevere" and a hard-rocking "Long Time Gone."
The good news for fans is that after his Tuesday replay there are still two more chances to see him, April 17-18, although prices on secondhand site StubHub are roughly $80 a pop. Wait until the day of the show and they likely will drop.
Photo: Buzz Person
Posted by Robert Kinsler at 7:47 AM