Happy Sunday everybody! I am still a bit groggy having driven out to San Bernardino County last night to cover Tim McGraw's Two Lanes of Freedom tour stop. If you are an Orange County Register subscriber, you can read my concert review here. If not, I'll repost the review on this blog sometime this week.

Now 71, Paul McCartney continues to amaze. Read this wonderful review posted today in Billboard. Wish I could have been there! 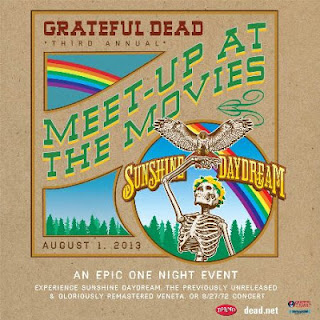 The Grateful Dead is back for the third annual “Grateful Dead Meet Up at the Movies 2013” on Thursday, August 1 at 7:30 p.m. (local time). This year’s Meet Up features “Sunshine Daydream,” the most requested release of the band’s entire career. Originally shot on 16mm film on the grounds of the Oregon Country Fair in Veneta, Oregon in 1972—and painstakingly restored to HD resolution—“Sunshine Daydream” captures the band at the height of their powers.  With the Dead lending their services to the Kesey family to help keep their Springfield Creamery afloat, this colorful counterculture time capsule features special appearances by key members of the Grateful Dead community and a cavalcade of Merry Pranksters.
Featuring all new stereo and 5.1 audio mixes, the set list for this epic performance includes “Bird Song,” “Dark Star,” “Jack Straw,” “Playing In The Band,” and more.
"Grateful Dead Meet Up at the Movies 2013" will be presented in nearly 450 select movie theaters around the country -- click here for a full list of participating theaters (subject to change):
Tickets are available now at participating theater box offices and online at www.FathomEvents.com.


Finally IWRESTLEDABEARONCE has announced details about their forthcoming album and tour. Below is the official media release: