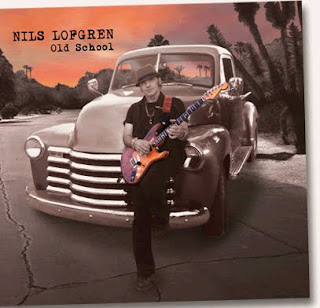 It's been five years since the release of Nils Lofgren's last studio album featuring his own songs and, with his forthcoming release titled, Old School, he's got something to say.

An effort that's been in the works since the culmination of Springsteen's Working on a Dream Tour in November of 2009, Lofgren's Old School covers a variety of topics including desperation, self-doubt, true love, departed friends, holding on to your dreams and the world gone mad... along with a tribute to the late, great Ray Charles.

"These songs reflect characters with some radical feelings and beliefs," states the singer, songwriter and multi-instrumentalist Lofgren. "They're definitely thought-provoking."

The CD -- due out on Tuesday, November 1, 2011 -- will be his eighth studio release on Vision Music, the label also responsible for 2008's The Loner - Nils Sings Neil (an homage to Neil Young, whom Nils started his career with over four decades ago) and 2006's Sacred Weapon.

"Old School has many different types of songs and feels... some rough, bluesy tracks to haunting acoustic songs," continues Lofgren. "There's some interesting and controversial characters in these songs and I look forward to everyone's reaction."

"our spineless Congress should all be fired
get some women and men
with balls and sense hired
child rape and murder
one strike and you're down and out
with our kid's lives at stake what's to figure out
oh no ain't no old school anymore..."


It's not for the timid.

Old School features a total of a dozen songs (see below for track listing), all produced by Nils with the exception of the song, "Why Me," which was produced, recorded and mixed by Brian Christian (Alice Cooper/KISS/The Babys fame).

Sam Moore comments about the collaboration, "It hit me when I was in the studio with Nils that we've lost so many of our friends, peers and colleagues in the past few years... The Big Man, Billy Preston, Wilson Pickett, George Harrison, Solomon Burke, Johnny Cash, Isaac Hayes. It hit me how true it is that there 'ain't too many of us left.' I was flattered and honored that Nils asked me to join him to pay a little honor and remind everyone in some way to remember our dear but departed friends and loved ones."

"Ain't Too Many Of Us Left" has been made available as a free download at www.nilslofgren.com for fans to enjoy and the entire CD can be pre-ordered on the site as well.

Also appearing on Old School is the song, "Irish Angel" (written by the great Bruce McCabe) that Nils has been singing for years at his acoustic shows along with a ballad Nils wrote with an old friend and great DC-area artist, Root Boy Slim, called, "Let Her Get Away."

"I've always wanted to share that particular song but never got it together until now," says Nils. "Sadly, Root Boy's not with us any longer, but I know there are fans out there that will appreciate this touching, haunted country-type ballad of ours."

As an integral member of the Bruce Sprngsteen's E Street Band since 1984, Nils has remained consistently busy as part of the group, and as a solo artist.

In addition to songwriting and performing, Nils also devotes substantial time to his online guitar school (http://www.nilslofgren.com/Lessons07.html), which has garnered tremendous response from guitar players all over the world. Beginner lessons are offered in English, Spanish and Italian...

In early September, Nils released "When You Are Loved" (via free download on his site), a 9-11 song that honors heroes, victims and families.

Beginning Oct. 19, Nils has set out on the road for a few dates (see full itinerary on his Web site) to talk up the album and have some fun.

He'll travel from town-to-town, playing his favorite songs in intimate venues, talking to friends and fans... something he's enjoyed for 43 years now. 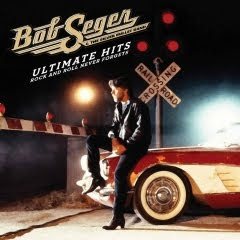 For the first time, all of Bob Seger’s top hits have been gathered for a career-spanning 2CD and digital collection titled Ultimate Hits: Rock And Roll Never Forgets. To be released Monday, November 21 by Capitol/EMI, the 26-track collection includes “Night Moves,” “Turn The Page,” “Hollywood Nights,” “Mainstreet,” “Old Time Rock And Roll,” “Like A Rock,” “Her Strut,” “We’ve Got Tonight,” “Against The Wind,” “Still The Same,” and many other Seger classics, as well as the Detroit rocker’s two #1 radio singles from this year, “Downtown Train” and his current #1 Classic Rock hit, “Hey Hey Hey Hey (Going Back To Birmingham).”

The collection also includes Seger’s timeless rendition of the Holiday classic “Little Drummer Boy,” its first appearance on a Bob Seger album, as well as the original mono version of Seger’s first hit “Ramblin’ Gamblin’ Man.” All songs on the album have been meticulously remastered from the original master tapes.

On September 13, 2011, Seger offered fans a Free 6-Track Bonus EP on iTunes to celebrate the release of the digitally remastered multi-platinum Nine Tonight and Live Bullet concert albums. During the one week promotion, Seger gave his fans 1,698,000 free downloaded tracks. Seger & his Silver Bullet Band’s live performances have led to record sales in excess of 51 million including 11 platinum and seven multi-platinum RIAA-certified album awards. Seger holds the distinction in 2010 for the #1 Catalog Album of the Decade for his Greatest Hits, which has sold over nine million copies (U.S.A.) to date, posting an unbroken 17-year streak on Billboard’s Top 200 Albums and Catalog Albums charts.

Ultimate Hits: Rock And Roll Never Forgets (2CD; digital)
DISC ONE:
1.Old Time Rock And Roll
2.Hollywood Nights
3.Night Moves
4.Mainstreet
5.Roll Me Away
6.Turn The Page
7.Her Strut
8.Still The Same
9.You’ll Accomp’ny Me
10.We’ve Got Tonight
11.Like A Rock
12.Fire Lake
13.Tryin’ To Live My Life Without You 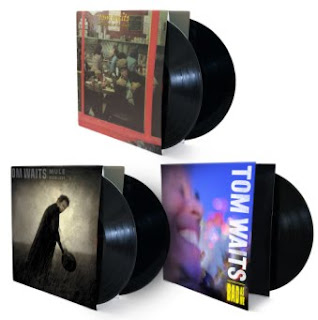 On October 24, 2011, legendary singer-songwriter Tom Waits will release BAD AS ME, his first studio album of all new music in seven years. To celebrate, PopMarket, Sony Music’s online daily deals site, will offer an exclusive vinyl bundle which includes the new album, Waits’ 1975 double album NIGHTHAWKS AT THE DINER and the Grammy-winning MULE VARIATIONS.


Each vinyl copy is packaged with their original artwork, with BAD AS ME containing a full-size book of lyrics and photos and a bonus CD of the whole album. All LPs are pressed on 180 gram black vinyl and are must-owns for any Tom Waits fan!


The Tom Waits vinyl bundle will be available exclusively on PopMarket.com as a Deal of the Day on October 24, 2011.
Posted by Robert Kinsler at 6:01 PM