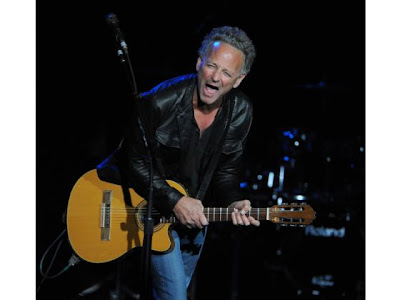 This concert review was originally posted on Soundcheck on Tuesday, Oct. 18, 2011. A special "thank you" to Kelly A. Swift for the great image she shot at the concert!


It’s been an exciting year for fans of live classic rock. In just the past six months or so, John Fogerty, the Zombies, Steely Dan, Paul Rodgers and even the Monkees have all delivered fantastic age-defying concerts throughout Southern California.

Add Lindsey Buckingham’s 95-minute set Monday night (Oct. 17, 2011) at City National Grove of Anaheim to the list. Performing both alone on acoustic guitar as well as with a terrific three-man band, the singer-songwriter and guitar virtuoso – who appeared at the venue just days after Stevie Nicks sold it out – served up a mix of Fleetwood Mac classics, solo hits and new material that showcased how (like Neil Young) he is the rare 60-something who continues to challenge himself artistically while simultaneously creating some of the best work of his long career.

The Hall of Famer, who recently turned 62, is on tour in support of his September release Seeds We Sow, an outstanding 11-song disc that has deservedly garnered rave reviews. Many of the highlights of his 19-song set in O.C. came from that new album, including the experimental rocker “In Our Own Time,” the beautiful “Illumination” with its lush vocal harmonies, and a rousing take on “That’s the Way That Love Goes.”

Buckingham began the night walking out on the big stage alone, opening the show with an energetic “Shut Us Down,” which, like many of his songs, doesn’t fit neatly into a single style. While that song boasted a country-meets-blues vibe, other selections fused folk-rock, instrumental fingerstyle guitar work, melodic pop-rock and even jazz into his foundation.
In fact, Buckingham’s first five songs, including a sparse reworking of his solemn solo hit “Trouble,” were all delivered solo. From there he tackled his first Fleetwood Mac track of the night, “Never Going Back Again,” his fretwork and vocals gaining power as he ended the song with a flourish.

One of the most remarkable things about the performance was how easily Buckingham and his band shifted through various sounds and eras without a loss of momentum or focus. An early highlight of his wide-ranging set list included the propulsive folk-rocker “Under the Skin,” with Buckingham, Neale Heywood and Brett Tuggle all strumming their guitars while drummer Wilfredo Reyes Jr. kept the rhythm moving with skilled backbeat.

Mac fans were fully rewarded with several of the band’s best songs, including Buckingham’s “Go Your Own Way” and “Second Hand News” (both off 1977’s Rumours) and the title cut from 1979’s Tusk. “Go Your Own Way” not only sounded great but was one of many times that Buckingham’s unique talents as a guitarist shined; the lengthy solo at the end of the song delighted the crowd, on their feet and moving with the music.

Further enhancing the performance was his low-key but heartfelt introductions to much of his material.
“This is why we do this: people like you,” Buckingham said, acknowledging the loud crowd response after his rendition of “Tusk.” He thanked the audience for supporting him to be in the unique position of being allowed to work in two worlds, his so-called “big machine” (Fleetwood Mac) and his “little machine” (his solo career).

The far-too-fast night ended with Buckingham coming full circle, performing alone again, this time delivering the powerful title track from Seeds We Sow with all the depth and nuance he applies to his best-known hits. “I had a dream that you reached for me in the night,” he sang. “Touched me soft and slow / Everything was wrong but everything was right / Oh, the seeds we sow.”
Posted by Robert Kinsler at 8:12 AM