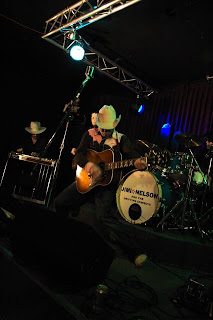 Photo credit: April Ray McCarty
Jimi Nelson and the Drifting Cowboys
Where: Swallow’s Inn, 31786 Camino Capistrano, San Juan Capistrano
When: 8 p.m. on May 2
How much: Free
Contact: Call 949-493-3188
Online: www.myspace.com/theJimiNelsonBand
Growing up in Moline, Illinois, Jimi Nelson was introduced to some of country music’s greatest artists, with Nelson’s parents playing the music of Johnny Cash, Hank Williams, Waylon Jennings, Willie Nelson and early Elvis Presley.
So it’s not surprising when he was given his first guitar at age 12 that Nelson began to master the genre.
Now it is Nelson who is headlining concerts, bringing his original blend of classic and modern country music to stages throughout the West. Nelson and the Drifting Cowboys, who won the award for country/rock band of the year at the Los Angeles Rock City Music Awards in 2008, will headline at the Swallow’s Inn in San Juan Capistrano on Saturday night, May 2, 2009.
Nelson’s Drifting Cowboys features lead guitarist Eddie “Bareback” Montes, bassist Paul “Humbolt Country” Jaeger, drummer Ryan “The Bronc ‘O’” Connor and pedal steel player Chris Harvey.
The concert will provide a chance for fans to hear Nelson and company to showcase material from their newly-issued Tumblewead Records release, the aptly-titled “Do Drop In.”
Fans of artists such as Merle Haggard, Dwight Yoakam, Buck Owens and the aforementioned Jennings will love the authentic honky-tonk minded sound of the troupe. Highlights on “Do Drop In” include the Gram Parsons-styled “Baby Come Home,” beautiful ballad “Who Needs You” and authentic Bakersfield sound of “100 Tears.”
The cover of “Purple Rain” is another standout on the album, with Nelson completely reworking the Prince classic.Nelson will be selling and signing copies of “Do Drop In” at Swallow’s Inn on Saturday night.
Posted by Robert Kinsler at 8:29 AM