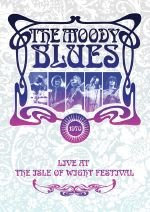 THE MOODY BLUES: LIVE AT THE ISLE OF WIGHT FESTIVAL will be released on DVD May 26, 2009.
On July 30, 2006, I saw The Moody Blues deliver an incredible full-length concert at the Pacific Amphitheatre in Costa Mesa. The legendary band's show was wonderful and a reminder of the timeless power of a band whose unique and groundbreaking sound continues to resonate with audiences today.
Earlier today, I received an exciting press release that Eagle Vision will soon release The Moody Blues' 1970 concert at The Isle Of Wight on DVD next month.
Here is a copy of the news release:
New York, NY (April 27, 2009)—Eagle Vision, the wholly-owned subsidiary of Eagle Rock Entertainment, will release The Moody Blues: Live At The Isle Of Wight Festival 1970 on DVD for the first time May 26 (pre-book order date May 5, retail sales price $14.98). This is the legendary much talked-about 79-minute 11-song performance that The Moody Blues—at the height of their popularity and creative powers—totally entranced the hippie audience with on a hot night in August off the coast of England.
Bonus material includes a 20-minute documentary keying in on the behind-the-scenes machinations that took place before, during and after this remarkable event. This historic set of Classic Rock stands complete and unexpurgated as performed by guitarist/vocalist Justin Hayward, bassist/vocalist John Lodge, vocalist/flutist Ray Thomas, drummer Graeme Edge and keyboardist/vocalist Mike Pinder. Touring in support of A Question Of Balance album, The Moody Blues, at this point in time, had had four albums all in the Top 5 U.K. (with two #1s). The audience on this night topped half a million. It was an era that will never be duplicated. This is one of the most indelible, groundbreaking and iconic live performances of the Classic Rock era.
The Isle Of Wight Festival itself is one of the most cherished fests of rock history. It debuted in 1968, continues today, and is most famous for its 1970 lineup that included ELP, Tull, Hendrix, Baez, Kristofferson, Miles, Sly, The Doors, The Who, Moodies and more. The Moody Blues: Live At The Isle Of Wight Festival 1970 has been heard but not seen. Until now…when it all comes stunningly alive on this DVD. Track Listing1) Gypsy2) Tuesday Afternoon3) Never Comes The Day4) Tortoise And The Hair5) Questions6) Sunset7) Melancholy Man8) Nights In White Satin9) Legend Of A Mind10) Ride My See Saw11) Conclusion
Eagle Rock Entertainment is an international media production and distribution company operating across audio visual entertainment programming. Eagle Rock Entertainment works directly alongside talent to produce the highest quality programming output covering film, general entertainment and musical performance.
Posted by Robert Kinsler at 11:23 AM