Sights and Sounds: The Church, The Lone Bellow, Rising Appalachia

Here is a roundup of some of the week's biggest news, including today's announcement from Steve Kilbey of The Church. That item leads off this roundup...


14,600 Nights of Space RocknRoll
the first 40 years....
A band is like a family and over 40 years it is only natural that families will change and that members will come and go. Therefore it is with great sadness that we must announce the departure of Peter Koppes from our ranks to explore his own musical path. Peter has made the hugest contribution to the Church's sound and he will be sorely missed. However the remaining members have decided to carry on with this immense body of work which Peter, as well as Richard Ploog, Jay dee Daugherty and of course Marty Willson-Piper, have been invaluable in creating.

We wish Peter all the success with whatever he pursues from now on.
The good news is The Church are delighted to announce Jeffrey Cain will be staying on as a permanent member with Ian Haug and Tim Powles and we are very happy to welcome Melbournian guitar slinger Ashley Naylor into the band.

We are already under way creating a brand new album which so far is turning out to be a beautiful thing. "
Steve Kilbey
Coogee
01.02.2020


The Lone Bellow release "Just Enough to Get By"

The Lone Bellow's 'Half Moon Light' arrives via Dualtone Records on Feb. 7, 2020

The Lone Bellow has released a new song, the powerful and deeply personal "Just Enough To Get By." The song, written by Kanene Donehey Pipkin, is the latest song from the band's eagerly awaited new album, Half Moon Light, due next Friday, February 7 from Dualtone Records (An Entertainment One Company); pre–orders – including limited edition gold vinyl and autographed merchandise bundles – are available now. You can read my review of the band's breakout performance at the Stagecoach Festival back in April 2013 here.

"I wrote this song when I heard a secret kept by someone close to me," says Pipkin. "It was a secret about a trauma they had experienced decades ago, and had kept hidden from nearly everyone they could, until everything unexpectedly came out into the open. Even then, she didn’t know if anyone she’d told believed her. I wanted to put myself in her shoes. When I began to imagine the years of burying this secret, I heard words of advice from all sides; cross-stitch clichés, culture, my confidants, my own mind. Mostly, they told me to get over it, keep it to myself, protect my reputation, and to never discomfort others with the truth of my past. I realized that living that way would only give me just enough to get by; I’d never be free."

LISTEN TO "JUST ENOUGH TO GET BY"

WATCH "JUST ENOUGH TO GET BY (BEHIND THE SCENES)" VIDEO

Earlier in the month, The Lone Bellow unveiled their super-charged muscle-car lovin’ lyric video for their chart–topping single, “Count On Me,” streaming now at the band’s official YouTube channel. “Count On Me” – which recently hit #1 at Americana radio outlets nationwide, with spins on over 70 Triple A and Americana stations across the country – is but one of the indelible highlights of HALF MOON LIGHT, alongside the song, “Good Times,” streaming now following an exclusive premiere via Billboard, which praised the song as “rhythmic, joyous.” A special teaser video detailing the writing and recording of “Good Times” is streaming now via YouTube.

WATCH “COUNT ON ME”

Half Moon Light marks the fourth studio album from and first new LP since 2017 from The Lone Bellow. The Brooklyn, NY-based band – Zach Williams, Kanene Donehey Pipkin, and Brian Elmquist – first heralded the album last November with the transcendent “Wonder,” streaming now after an exclusive premiere via Relix, which hailed the track as “moving, wistful.”

LISTEN TO “WONDER”
Produced at The National’s Aaron Dessner, Half Moon Light is an artistic triumph worked toward for years, earned not by individual posturing, but by collective determination and natural growth. Recorded at Dessner’s Long Pond Studio in Upper Hudson Valley, NY and featuring guitarist Josh Kaufman and drummer J.T. Baites, the album finds The Lone Bellow pushing their acoustic storytelling prowess past new horizons, experimenting with textures and instrumentation to create their most sophisticated work to date. With earthy three–part harmonies and songwriting as provocative as it is honest, the trio – made up of guitarist Elmquist, lead vocalist Williams, and multi–instrumentalist Pipkin – creates sparks that make a stranger’s life matter or bring our sense of childlike wonder roaring back. With Half Moon Light, The Lone Bellow have returned, unified and invigorated with boundless ambition.

The Lone Bellow just started celebrating Half Moon Light with an extensive world tour that got underway January 22 and 23 with a sold out two-night-stand at London’s St. Pancras Old Church. North American dates begin with a two-night-stand at Los Angeles, CA’s famed Troubadour on February 12 and 13 and continue through the band’s first–ever headlining show at Nashville, TN’s historic Ryman Auditorium on April 24. Additional European tour dates and an array of festival appearances are also slated. For complete details, updates, and ticket information, please visit www.thelonebellow.com/tour. 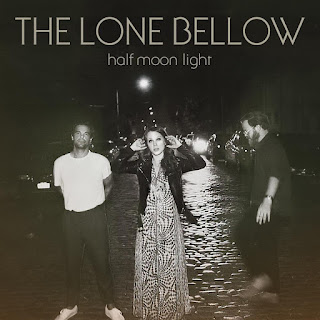 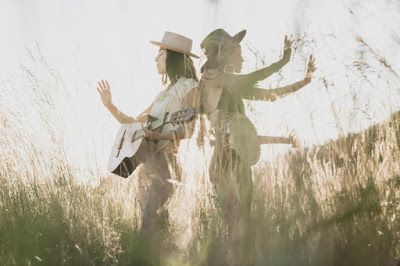 Nashville, TN - Adored world-folk music group, Rising Appalachia, are pleased to invite viewers, both new fans and old, to their NPR Tiny Desk Concert which was filmed in November of last year while the band was routing through Washington D.C. for their sold out show at The Hamilton Theatre. Known for broadening the definition of, and educating listeners on folk music, the band is led by sisters Leah Song and Chloe Smith, who are joined by longtime members David Brown (stand-up bass, baritone guitar) and Biko Casini (world percussion), as well as two new members: West African musician Arouna Diarra (n’goni, talking drum), and Irish musician Duncan Wickel (fiddle, cello). The sonic textures of these two cultures are woven into Leylines, the band’s latest album, enhancing the stunning blend of folk, world, and urban music that has become Rising Appalachia’s calling card. Watch Rising Appalachia’s Tiny Desk Concert here.

Leylines has been a defining record for Rising Appalachia, garnering praise from a wide swath of critics and solidifying their place in the greater Americana musical movement. Brooklyn Vegan called “Speak Out,” one of the album's standout tunes featuring Ani DiFranco, “an appealing dose of fiddle-fueled folk and close harmonies.” NPR praised album closer, “Resilient,” as an “uplifting, original folk anthem” and Rolling Stone called their sound “protest music for the modern age bolstered by delicate, skillful musicianship and otherworldly vocal harmonies.” They topped off 2019 ranking #8 on the NACC Top Albums Chart, holding the #1 spot for over 6 weeks this past summer. Most recently, Billboard featured the video for “Cuckoo,” calling the song a “perception changer,” and noting that it “channels their southern roots.” Redefining and widening the circles of what it means to be a southern-based band is something Leah and Chloe are constantly exploring. Leah put her thoughts on this on paper for The Bitter Southerner’s Folklore Project, identifying and exploring common threads that run from Peru to the American south.

Fans should stay tuned for announcements on new music, and in the meantime make plans to seek the band out on tour. New tour dates were announced this morning including a stop at every band’s bucket list venue, Red Rocks Amphitheatre.

Visit https://www.risingappalachia.com/ for more information and tickets.
Posted by Robert Kinsler at 8:30 AM