With the end of 2018 clearly in sight, some clear favorites are appearing on many "Best Of" lists, including the latest album from the trio comprised of Miranda Lambert (Lone Star Annie), Ashley Monroe (Hippie Annie) and Angaleena Presley (Holler Annie)...


Pistol Annies' latest album, 'Interstate Gospel, is being hailed as one of the best of 2018 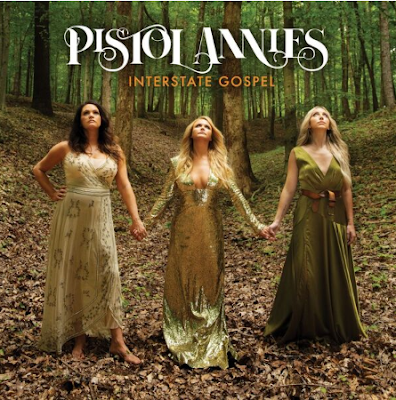 NASHVILLE, TN - Country supertrio PISTOL ANNIES released their third album INTERSTATE GOSPEL last month via RCA Records Nashville. Since its first announcement early this fall, the album has garnered continuous critical acclaim and debuted at #1 on the Billboard Top Country Albums Chart. Listen now on all streaming platforms and purchase the album HERE.
Penned by the Pistol Annies, the 14-track album showcases the group’s stunning harmonies, such as the "classic country tearjerker" (Stereogum) "Masterpiece"; "sly take on gender roles" (Variety) "Sugar Daddy"; "saucy, high-spirited" (Rolling Stone) "Stop Drop and Roll One“; "more irreverent than earnest” (NPR) “Interstate Gospel”; and “confession of dead-end desperation" (New York Times) “Best Years of My Life.” Moving from celebratory anthems, classic country storytelling and vibey swagger, the Grammy-nominated trio are back and sounding Annie-er than ever.
The Pistol Annies' very first single to go to Country Radio is "Got My Name Changed Back." Fans should listen for it on their local radio stations. The fun-spirited music video for the single is out now. Watch it HERE.

Rolling Stone - 40 Best Country & Americana Albums of 2018
"This supergroup is a true group, part of why the songs on their third set cut so deep."

NPR Music - The 50 Best Albums of 2018
"After their long hiatus, they deserved to be received like a trio of heroines this year."

Esquire - 10 Best Country Albums of 2018
"...the best country record to release in 2018 and one of the finest collections of the decade. It's a celebration of the female experience, scars and all, and a phenomenal ode to the ties that bind us."

Billboard - Best Albums of 2018
“Lambert, Monroe and Presley have, in a two-year span, each released damn good albums on their own, but the camaraderie on their third full-length together makes a strong case for keeping the band together, till death do them part.”

Stereogum - The 10 Best Country Albums of 2018
“The Pistol Annies are a respite from the memoiristic songwriting Nashville so often demands of its female artists: the supergroup as a creative outlet for three storytellers who understand that there’s strength in numbers.”

Uproxx - The 20 Best Folk And Country Records of 2018
“On their third collection of songs together as a trio, Miranda Lambert, Angaleena Presley and Ashley Monroe prove that country’s insistence on keeping women down is not based on any logical realities regarding talent or listeners.”

New York Magazine/Vulture - The 15 Best Albums of 2018
"Miranda Lambert, Ashley Monroe, and Angaleena Presley are all country powerhouses in their own right, and when they unite as the Pistol Annies, it’s like iron sharpening iron."

The Ringer - The Best Albums of 2018
"Interstate Gospel is raucous and joyful even at its most scathing, with triumphant anthems about divorce (“Got My Name Changed Back”) and crushing ballads about the wonders of parenting. (“I picked a good day for a recreational Percocet,” begins an exhausted, unfathomably raw ode to motherhood called “Best Years of My Life.”)"

Taste of Country - 10 Best Country Albums of 2018
“It's the album fans wanted and the album Pistol Annies needed. A one-word review? Generous.”

About the PISTOL ANNIES: Combining the talents of acclaimed country forces of Miranda Lambert (Lone Star Annie), Ashley Monroe (Hippie Annie) and Angaleena Presley (Holler Annie), Pistol Annies deliver a high-spirited take on life the way real people live it. Songwriters/vocalists, the Annie collective allows the women the freedom to explore the genre (roots music) beyond their individual careers celebrating friendship, the rough patches and girl power. Having recorded with both the Chieftains and Jewel, their music has also been featured on The Hunger Games: Songs from District 12 and Beyond. They have released two albums, 2011’s Gold-certified Hell on Heels, which produced the Platinum single “Hell On Heels” and 2013’s Annie Up.
PistolAnnies.com | Facebook | Twitter | Instagram
Posted by Robert Kinsler at 9:57 AM