The very celebrated documentary on the late Nina Simone is set to be released in various formats later this summer. Here is the media release... 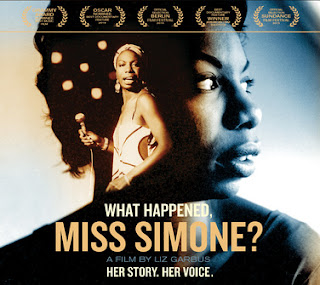 Nominated for the Academy Award for Best Documentary at the 2016 Oscars®, Best Music Film at the 2016 Grammy Awards, and winning Best Documentary at the American Film Institute Awards in 2016, documentary film What Happened, Miss Simone? connected with critics and fans alike with its deep examination of the legendary Nina Simone.  On September 2, 2016, Eagle Rock Entertainment will present this film as a DVD+CD, Blu-ray+CD, and on Digital Formats, with additional bonus interviews not included in the main film. [MSRP $26.98 Blu-ray+CD, $21.98 DVD+CD]
What Happened, Miss Simone? is the story of Nina Simone’s life and career. Through archive interview and extensive performance footage, alongside new interviews with family, friends and colleagues, the film paints a fascinating portrait of this complex and challenging artist.
Nina Simone was many things: pianist, singer, songwriter, performer, civil rights campaigner, wife and mother, victim of abuse, and black icon. Growing up in the segregated American South, she began to learn piano at age 4, attended the Juilliard School Of Music in New York and aspired to a career as a concert pianist. Thwarted in this, allegedly because of her color, she began to play in nightclubs to earn money and her career as a jazz and blues performer was born. The film follows Nina Simone through the sixties and her intense involvement in the civil rights movement, her decision to relocate to first Africa and then Europe in the early seventies, her emotional difficulties in the eighties, and her later years in France in the nineties.
The CD portion -- Music From And Inspired By What Happened, Miss Simone? – includes a collection of songs from across Simone’s career. A blend of studio recordings and live performances, the album includes “I Loves You Porgy,” “Sinnerman,” “Feeling Good,” and her compelling take of “I Put A Spell On You,” among others. The first nine songs were included in the film.
A captivating film about an extraordinary and influential artist, What Happened, Miss Simone unveils the struggles and triumphs of an icon, and further exudes why Nina Simone will continue to be revered for generations to come.
Amazon links:
DVD: http://amzn.to/2a9kNNB
Blu-ray: http://amzn.to/2abvr9z
Eagle Rock Entertainment is the world’s largest producer and distributor of music programming for TV, DVD, Blu-Ray and Digital Media. Eagle produces quality HD programs, both concerts and documentaries, directly alongside artists including Imagine Dragons, Paul McCartney, Katy Perry, The Rolling Stones, Pink Floyd, The Who, Queen, and Peter Gabriel. Eagle is a multiple Grammy® Award winner and has received numerous multi-platinum sales awards around the world.  Eagle Vision is headquartered in London, and is a Universal Music Group company.
Follow Eagle Rock Entertainment at:
Facebook:  www.facebook.com/EagleRockEnt
Twitter: www.twitter.com/EagleRockNews