TURN IT UP! - A Full-Length Film Celebration Of The Electric Guitar - Double-Disc DVD, Blu-ray, and Digital Download Out January 22, 2016

"Turn It Up!" indeed. Can't wait to see this and crank it up while watching! 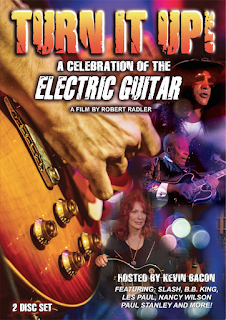 Celebrating the electric guitar, the full-length documentary film Turn It Up! will be released on January 22, 2016. A cinematic and auditory tour de force, the film – shot in high definition – is a combination of stunning photography, musical performances, world-class collections, and in-depth interviews – from international legends to “everyman” collectors. Released by 71st Street Entertainment, Turn It Up! will be available as a two-disc DVD set, two-disc Blu-ray set (with 2nd disc in standard definition only), and as a digital download (does not include bonus set). [MSRP $19.98]

Created and directed by Robert Radler (Best Of The Best 1 & 2, SS United States: Lady In Waiting, The Substitute), Turn It Up! is an emotional exploration of the electric guitar and the people who fall under its spell. Narrated by actor/musician Kevin Bacon, the film features interviews with an array of guitar royalty: the late Les Paul and B.B. King (in one of his final interviews), Slash, Robby Krieger, Paul Stanley, Steve Lukather, Nancy Wilson, Jeff “Skunk” Baxter, Albert Lee, Ana Popovic, Jerry Cantrell, Steve Howe, John 5 and many others.

The Turn It Up! DVD and Blu-ray sets not only include the full documentary film, but the “Conversations and Extras” bonus disc, which boasts extended interviews; scenes with the Burst Brothers; mini-documentaries onRKS Guitars and Seymour Duncan; Robby Krieger noodling on his guitar; and a performance of Jeff “Skunk” Baxter from the film S.S. United States: Lady In Waiting.

Turn It Up! simultaneously honors the beloved electrified six-string and recognizes the rich bond between musician and instrument, and the pilgrimage to find the ultimate guitar and perfect tone. From the mouths of those who invent them, build them, sell them, collect them, and those who make them sing, the film reveals the deep cultural love affair of the world’s most popular instrument, and explores its past, present, and future.

It’s the sound of rebellion, heartbreak, joy, fear, madness, pain, and all-out exuberance – the electric guitar has been a beacon of self-expression for generations, and Turn It Up! details exactly why.

The DVD, Blu-ray, and digital download will be available online and at physical retailers (through Sony RED Distribution).

For more information, stay tuned to the Facebook page: https://www.facebook.com/turnitupdoc
Posted by Robert Kinsler at 9:20 AM