Backed by a primo prog-rock outfit featuring former members of Yes, the live version of his latest opus, Ponder the Mystery, held a capacity crowd rapt at the Coach House. 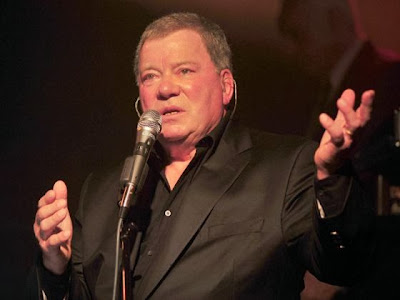 At 82, William Shatner shows no indication of retiring from his wide-ranging career as actor, director, comedian, product pitchman, talk-show host, author, sci-fi convention attraction, pop culture icon – and now prog-rocker.
Next at the Coach House: Dread Zeppelin, Oct. 31, $15; DSB (a Journey tribute) with Alter Ego, Fleetwood Max and Hemispheres, Nov. 1, $15; Lisa Marie Presley, Nov. 2, $20; Cowboy Mouth, Nov. 3, $15; Buddy Guy, Nov. 7, $75
Call: 949-496-8930
Online: thecoachhouse.com, ticketfly.com
Friday night (Oct. 25) the Emmy winner made the final stop of a short trek promoting his recently released fourth album, Ponder the Mystery, bringing his latest musical venture to the Coach House for a rare club experience as unique and entertaining as its charismatic captain. A capacity crowd filled the San Juan Capistrano venue early and was rewarded with an engaged Shatner supported by celebrated progressive rock band Circa, featuring two former members of Yes, guitarist Billy Sherwood and keyboardist Tony Kaye, plus bassist Ricky Tierney and drummer Scott Connor.
On record, an array of guests helps flesh out this latest opus, from guitar virtuosos Steve Vai and Al Di Meola to Foreigner’s Mick Jones and the Doors’ Robby Krieger, plus a slew of keys masters, including Edgar Winter, the late George Duke and another Yes man, Rick Wakeman. But here, with backing boiled down to just the Circa quartet, the group and its star storyteller delivered a magnetic 90-minute version of Mystery, capped by a 20-minute encore more focused on the group’s skills. 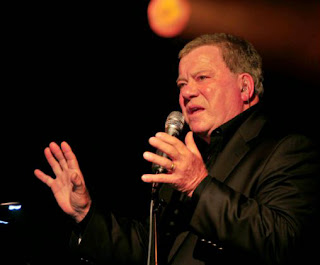 Although seated and using a workbook to guide him through lines and cues, Shatner's exaggerated spoken-word style – which has been lampooned over the years as much as praised, gaining considerable credibility with 2004’s Ben Folds collaboration Has Been – here blended with dazzling near-symphonic compositions penned by Sherwood, who also produced the new disc.
As Priceline’s pitchman noted early in the night, his current creation is about a guy who regains his joy of life over the course of an hour while sitting on the beach at sunset. That sounds like a fairly simple concept, yet it provided room for lengthy essaying in verses dealing with loss, the beauty and mystery of nature, mortality and personal redemption.
From the opening lyrics – "Where it's gone, I don't know, I'm missing something, give it back," his protagonist grappling with the realization of a life gone wrong – to the final Mystery track, the more hopeful "Alive," there were countless moments for Capt. James T. Kirk to employ his distinctive baritone while the band provided tuneful elements. Sherwood often added his strong tenor voice to choruses or played artful electric guitar solos that lighted the way for Shatner's lyrical trajectory.
"Manhunt" was one of several songs that fused melodic rock reminiscent of Asia with sharply imagistic storytelling. It certainly heightened the atmosphere that the audience, while cheering mightily after each selection, was otherwise quiet and tuned in during the songs themselves.
The title piece benefitted from rich harmonies by Sherwood and Tierney, as well as some of the headliner’s most dramatic poetry, his evocative lines placed amid Circa’s fills and counterpoint vocals. Even more beautiful was "Sunset," treated to a jazz-tinged backdrop and Kaye's textured orchestrations.
In all, it was a most unusual yet rewarding encounter, a contemplative piece of prog-rock theater that proves Shatner continues to go where no man has gone before.
Photos: Kelly A. Swift, for the Register

Make sure to check out this video I found on YouTube of the performance of "Manhunt," as well as Mr. Shatner's notes about the genesis of the project:

Posted by Robert Kinsler at 8:25 AM

Sounds to have been quite awesome. Wish I could had made it. Heard a song posted by Billy Sherwood on fb and that was incredible. Hope to see them live in concert in the future.

I had this very strange dream. My brother w as in a band with William Shatner. I never woke up.

What was the name of the last song they did about marijuana?