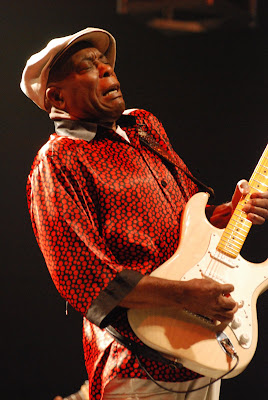 My review was originally published in Soundcheck on The Orange County Register Web site.

Over the past few decades there has been a tendency by blues fans (as well as writers who cover the genre) to seek out the next great electric guitar hero. Since the tragic death of Stevie Ray Vaughan in August 1990, Kenny Wayne Shepherd, Jonny Lang, Joe Bonamassa, even John Mayer have all been championed to fill that elusive role.

While those relative newcomers have their own ways to excite (my money’s on Bonamassa to be the most lasting and inventive), there is something to be said for checking out what few pioneers remain, especially when one is still at the top of his game.
Such was the case for a large crowd that mostly filled City National Grove of Anaheim Friday night to catch Buddy Guy, who at 75 proved he isn’t ready to be relegated to the sidelines. A sharp performer with a still-mighty voice and fiery guitar technique that has inspired everybody from SRV to Clapton, the Louisiana native thrilled the audience, despite admitting that he was a bit under the weather.

Whether performing his own hits or artistic remakes of material made famous by Cream, John Lee Hooker or Ray Charles, Guy was in full command. Early in his winning set, he led his four-man band through an epic “Hoochie Coochie Man” that allowed him to showcase both his expressive vocals as well as his ability to play guitar with startling dynamics — the softest touch at one point, firing on all cylinders moments later.

Another element that stood out is how much fun Guy seems to be having nowadays. He smiled, joked with the crowd and seemed eager to share the spotlight with the talented players around him. The highlight of a mini acoustic set found Guy sitting on a stool to offer up a reworked version of Cream’s “Strange Brew,” the master performing some of Clapton’s famous licks as he merged his own technique with lines familiar to every classic-rock true-believer in the house.
Guy’s most recent album, 2010′s solid Living Proof, was revisited toward the end of his 75-minute set courtesy of a confessional “74 Years Young.” “I still make blues albums even though they don’t play them on the radio,” he said before dipping into the Chicago-style song. His playing here, notably during the solo, was fiery yet controlled, emotional in a way that often eludes younger heroes out to impress with nothing but speed.
Still, this appearance flew by — almost as soon as it seemed to start Guy was rapidly finishing it, with a powerful version of his rocker “Someone Else is Steppin’ In.” I certainly hope that title isn’t true just yet.

Opening the show was a thrilling young outfit that put every second of its 45-minute spot to epic use. Wichita-based Moreland & Arbuckle boast a sparse lineup but cranks out a huge sound. Singer Dustin Arbuckle sang and blew harmonica to inject solos with rhythm in a way this writer hasn’t quite witnessed before. Aaron Moreland played various electric guitars (including a cigar-box axe), seamlessly mixing up lead riffs, tasty slide work and crunchy barre chords. Drummer Kendall Newby, meanwhile, had such a powerful style it filled in the sonic region where listeners might wonder what had happened to the bass.
But that description shares only part of their sound. The trio’s material is a perfect amalgam of Delta blues, Southern rock, folk and Chicago sizzle, with the melodic strains of “Just a Dream,” a rousing cover of Tom Waits‘ biting “Heartattack and Vine” and the heavy “The Brown Bomber” charging the night. How great it would be to see these guys tear it up on the Backporch Stage at the Doheny Blues Fest. As both the legendary headliner and these newcomers proved, blues isn’t about to go away quietly into the night.

To read more on Moreland & Arbuckle, check out my review of the band when they opened for Jonny Lang at the Anaheim House of Blues last year:
Posted by Robert Kinsler at 10:09 AM