John Lennon celebrated in 'Life Is What Happens' 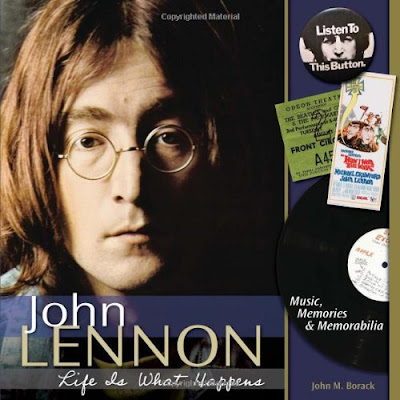 It makes total sense that John M. Borack would write a book on John Lennon.

"(Krause Publications) asked if I was interested in writing this book in October 2009," recalled the long-time Fountain Valley resident in a recent interview. Borack is a longtime contributor to the record collector's publication Goldmine magazine and is author of the first-ever guide to the melodic rock genre, Shake Some Action: The Ultimate Power Pop Guide, published by Not Lame Recordings in 2007.

"I jumped at the chance. The Beatles are the ones who got me into music in the first place."

John Lennon: Life Is What Happens is a 256-page book filled with 400 photos, artwork and images of memorabilia that celebrate the life of the former Beatle - from his childhood in the 1940s through the heights of Beatlemania in the 1960s and through his untimely death at age 40 in December 1980. The book is available at Amazon.com and other online retailers and will be in bookstores within the next week or so.

In addition to his own heartfelt text about the life and enduring legacy of Lennon as a musician, social activist and popular icon, Borack has gathered the stories and reflections of a number of musicians and fans as well.
Guitarist Earl Slick and bassist Tony Levin (both featured on Lennon's final album "Double Fantasy"), Smithereens drummer Dennis Diken, Turtles singer Howard Kaylan, actor-musician Bill Mumy (best known for his role as Will Robinson in "Lost in Space") and dozens of others contribute.

"I never knew Susan Olsen (who portrayed Cindy Brady on the "Brady Bunch") was such a big Beatles fan," Borack explained, when asked about the most unique contributor to "John Lennon: Life Is What Happens."
"One of her quotes about Lennon really touched me - 'I grew up in the sunshine of his art' - it's simple but it's so powerful."

Just as Lennon went through personal and professional struggles throughout his life, Borack's writing project was completed against the most difficult of times.

"My mother became very ill not long after the offer to write the book came in," he recalled, noting his mother Catherine Borack passed away on Nov. 27, 2009 - the day after Thanksgiving.

"In some ways it was difficult to do this with her being so sick. But writing so much of the book in the aftermath of her death, her spirit definitely guided me through the process. She would have been so excited and so proud to see the finished product. She would have gotten the first copy."

The forward of John Lennon: Life Is What Happens is dedicated to both Borack's late mother and father (John F. Borack) and immediately sets the tone of why Lennon's music still matters via a story I won't spoil here.

Borack will celebrate the release of his wonderful book with a signing and tribute concert at Fitzgerald's Irish Pub, 19171 Magnolia St., Huntington Beach, at 8 p.m. tonight, Friday, Oct. 8. Lennon would have celebrated his 70th birthday on Saturday, Oct. 9.

The special event will feature the music of the Beatles and John Lennon performed by Orange County-based rockers Walter Clevenger & the Dairy Kings, and the Popdudes (with Borack on drums). Performing with the Popdudes for the first time is Alan Bernhoft, well-known for his singing portrayal of Lennon in the tribute band Imagine.

"I'm very excited with how it turned out," Borack said of his new book. "When I was writing, I wasn't sure how the final product would look. The editors did an amazing job of gathering tons of rare photos and memorabilia to complement the text.

"Being able to see my name associated with John Lennon is a dream come true."
Posted by Robert Kinsler at 7:49 AM