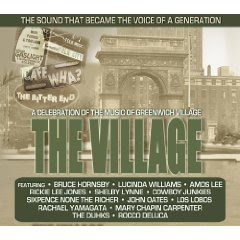 Today marks the official release date for an exciting and eclectic release from 429 Records.
"The Village - A Celebration of the Music of Greenwich Village" features a number of acclaimed artists who might not typically perform together, but whose collective talents are the perfect fit on this fascinating compilation disc.
The 13 songs on the disc are a celebration of the early-mid 1960s, when the Greenwich Village area of New York City was suddenly the center of a "musical, political and social evolution" that gave birth to a movement that stretched from the Big Apple (Bob Dylan) to Orange County, California (Tim Buckley). The artists who emerged out of this scene created groundbreaking folk music that gave voice to a young generation grappling with everything from the Vietnam War to the civil rights movement.
Fast forward to 2009 and more than a dozen artists pay musical tribute with renditions of popular songs of the day, as well as traditional gems that captured the youthful spirit of those turbulent times. Many compilations have a great song or two, with the others worth nothing more than a single listen. Not "The Village." This collection is especially strong, with Rickie Lee Jones kicking things off with a funky "Subterranean Homesick Blues" that is loose and infectious. Lucinda Williams also tackles a Bob Dylan classic, but her emotive delivery of "Positively 4th Street" is hushed and haunting.
Anyone who wonders whatever happened to Sixpence None the Richer will hear that the appeal of the reunited group is intact. Covering the traditional "Wayfaring Stranger," singer Leigh Nash's beautiful soprano floats over an artfully-arranged soundscape highlighted by Matt Slocum's wonderful guitar work.
Shelby Lynne also tackles a Dylan classic, using her strong vocal and a simple backdrop of guitars in "Don't Think Twice It's Alright." Other highlights on this ambitous collection include John Oates Americana-styled "He Was a Friend of Mine," Los Lobos' "Guantanamera," and Rachael Yamagata's "Both Sides Now."
Priced at only $11.99 at Amazon.com, I really recommend this set to everyone who is a fan of folk music, the '60s music scene or any of the artists featured on the collection.
Posted by Robert Kinsler at 8:48 AM