This story was first published on Tuesday, Aug. 4 when it appeared on the Orange County Register Web site. 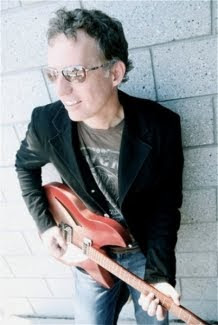 When it comes to crafting rock music for the ages, singer-songwriter Philip Vandermost is already a master.
The Laguna Niguel resident celebrated the release of his sophomore album "The Long Path" with an appearance as part of the acclaimed International Pop Overthrow (better known as IPO) festival in Huntington Beach on July 25, and also performed a full-length encore via an afternoon set at the OC Fair in Costa Mesa the following day.
"The Long Path" is a triumph, filled with propulsive power-pop ("New Way," "Trying Again"), articulate guitar rock ("Barefoot," "Miles to Go") and classic rock-styled songcraft ("Turn Me Around," "Alone"). Across the 11-song disc, Vandermost's skills as singer and guitar virtuoso shine, building on the promise he displayed on his 2008 debut, "Automatic August."
Vandermost and his band will perform a free full-length show at Mahé in Dana Point at 7 p.m. on Saturday night, Aug. 8, while he will perform a solo acoustic show at the same venue on Thursday, Aug. 20.
"The Long Path" was produced by Andrew Alekel, who is credited with engineering and producing albums for Foo Fighters, No Doubt, Queens of the Stone Age, Matt Costa and others.
"Andrew sent me an e-mail and asked if I was interested in doing a CD," recalled Vandermost in a recent interview.
"I had just finished home demos for the next CD so the timing was perfect."
Vandermost, bassist Scott Vonkaenel and drummer Nick Hoffman spent 11 days recording and mixing tracks at Grandmaster Recorders in Hollywood.
"I knew I would have to have the arrangements down," explained Vandermost, noting Alekel's studio expertise helped every step in the recording process.
"To me, this (album) is light years beyond what I did last time," Vandermost said.
His favorite track is the title track, which boasts an immediately-luring vocal melody wrapped around a lush rock soundscape.
"'The Long Path' is especially significant; musically, it's inspired by classic rock I listen to and new rock too – it brings old and new together. (Lyrically) It's about my journey (through life) – it looks at appreciating each other and not to lose hope," Vandermost said.
The song also features plenty of Vandermost's virtuoso guitar work, which is always unleashed in the service of the songs.
"I love performing too. It has been a wonderful development in the way that I express myself," said Vandermost, a celebrated lead guitar player who was a member of Greenwich Meantime, the Kelly Bowlin Band and the George Fryer Combo before embarking on a solo career in 2008.
Vandermost has been embraced by leaders of the regional music scene, with IPO founder David Bash among his growing number of supporters. In addition to picking up both his albums at his live performances, listeners can purchase his album via iTunes, Amazon.com and other well-known online music distributors. He also wrote a melodic pop-rock gem, "Again and Again," that is included on the newly-released "International Pop Overthrow: Volume 12" collection available via Not Lame Recording Company.
"IPO is a great community, and a great umbrella for promoting independent music," Vandermost said.
Posted by Robert Kinsler at 11:01 AM

Recently, I was introduced to Philip Vandermost's music by a good friend of mine. Immediately, I became a HUGE fan. The mixture of classic rock and alternative rock makes this album fresh and the lyrics are amazing! I absolutely love the classic guitar sound in The Long Path and Vandermost is a truly talented singer, songwriter and musician. I highly recommend this album!