R.E.M. is back! "Accelerate" a true return

I was wrong; R.E.M. was not down for the count. 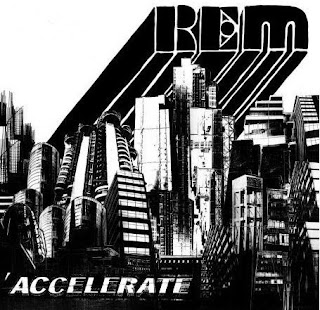 The band's latest album "Accelerate" is truly the best collection of songs from the Athens, Georgia outfit since 1991's "Out of Time" or arguably that album's noteworthy follow-up "Automatic for the People."

The songs are short and get to their respective destinations in fast and dramatic fashion. Biting lyrics, effective chord changes and emotive vocals from singer Michael Stipe tell part of the story, but the magic that typified songs on "Murmur" and "Reckoning" is back on display here on songs such as the aforementioned "Until the Day is Done" and "Sing for the Submarine."

While the departure of drummer Bill Berry in October 1997 left a long-lasting void in the band, it appears that Stipe, guitarist Peter Buck and bassist Mike Mills have rediscovered something I thought lost on "Accelerate." Produced by Jacknife Lee and R.E.M., "Accelerate" already ranks as one of the best albums of 2008.

"Accelerate" has given me reason to celebrate, and R.E.M (once again) rocks.
Posted by Robert Kinsler at 1:40 PM

It's definitely one of their best albums since the mid-'90s. They really fly through the songs quickly.