Bayadera: World Music in the O.C. 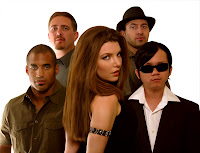 Photo credit: Tyler Davis
Since Bayadera emerged on the area music scene at the beginning of the decade, the band has been acclaimed for blending modern rock and world music influences together in a way that both challenges and rewards discerning listeners.
And while the group's early recordings, including a 2001 self-titled release and 2003's "90 Million Miles," showcased the quintet's solid songwriting and dazzling live performances, the newly issued "Rotation of the Earth" is clearly a triumph. Produced and mixed by Matthew James Walin at Bitemark Studios in Orange, the CD showcases Bayadera's wide-ranging soul in spades.
"There are countless differences," bassist Chris Payne said in comparing Bayadera's earlier recordings with "Rotation of the Earth."
"The first one was written very early on when we were just beginning to work with Gina (singer Gina Bandy). This one, all of us have written the songs together and are used to each other and where we fit."
The group's dynamic lineup also features electric guitarist Saatara, acoustic guitarist Dat Nguyen and drummer Donn Untiet. Untiet's wife, Evonne Untiet, frequently adds percussion at the band's live shows.
The band's artistic growth isn't the only major ingredient that makes "Rotation of the Earth" so special; Walin's involvement was also critical. Indeed, Payne explained that Walin wouldn't allow the band to settle for lackluster performances, recordings or mixes while in the studio.
"He was all about making it better," Bandy said of Walin.
"Because we have been together so long, we needed that outside someone to refine our music. Matt came in and got us to tackle this."
Walin said he has certain things he considers before working with an artist and signing them to his label.
"The biggest thing is a gut feeling. Technically, the band has to have a great singer and great songs," Walin said.
Walin was especially impressed when the band came into the pre-production stage of working on the CD armed with 40 or so songs.
"They are such a great live band, I wanted to capture that," Walin said.
After three months of pre-production, Walin ultimately recorded about 15 songs – 13 of which appear on "Rotation of the Earth." Most of the basic tracks were recorded over a few days, and many of Bandy's first vocals (often called "scratch vocals") were kept to help keep a strong live sound on the album.
"We're all in this band because we're happy and enjoying it," Bandy said of the band.
That positive approach to working together and making music seems to drive Bayadera and the troupe's burgeoning success.
"The one thing I've always liked about it is everybody is concerned about the song and everybody has the band in mind," explained Donn Untiet.
Bayadera is not a typical band in terms of sound or background. Nguyen is blind, and the group's multi-ethnic lineup provides even more depth to the sonic proceedings.
"The chemistry with us is great," Nguyen said. "We are living proof of a group (with a wide range of backgrounds and experiences) that can work together."
Nguyen is such a fantastic guitar player and has such an engaging personality, the other members of Bayadera noted they often forget that he is blind.
"Most people don't have his confidence," Bandy said.
A highlight of the band's career came in October, when Bayadera was invited by Stevie Wonder to perform "Superstition" with him when he received the Governor's Award of Excellence at the 25th annual Media Access Awards at Universal Studios' Globe Theatre on Oct. 14.
"It was a life-changing experience personally and professionally. I grew up with that music in my house," Payne said.
Information: www.Bayadera.com.
Posted by Robert Kinsler at 12:27 PM