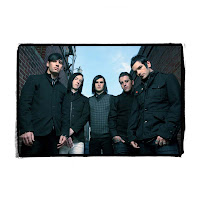 Photo credit: KEVIN ESTRADA
Orange County used to be the place where musicians would seemingly get their start and then move on in search of greater fame or a more prominent place to feed their artistic appetite.
The list of musical exports includes artists such as Jackson Browne, Gary Allan and leading members of No Doubt and Sugar Ray.
But times are truly a changing as artists from as far away as New Jersey (Walter Trout), New York (Lee Rocker) and Hawaii (National Product) now call Orange County home.
Add to that list a fantastic Australian export, the Dear & Departed. The quintet's inception and history is complex, but the members' various backgrounds include extended residences in England, Wales, New Zealand and – most recently – Australia before setting up sonic shop in Orange County in 2006.
The band's full-length debut "Something Quite Peculiar" was released by Science Records on May 22 and the group has found a growing audience for its accessible blend of '80s and '00s styles. Fans of the Cure, New Order and the Church, as well as modern rockers such as Placebo and Rock Kills Kid will enjoy the Dear & Departed.
"I think we are playing just what comes out," said singer Dan Under in a phone interview earlier this week. The Dear & Departed also features guitarist Simon O'Gorman, drummer Joel Bourne, guitarist Darren Parkinson and bassist David Williams.
"We've all had an English music upbringing. My dad is responsible for getting me into music from a very young age," Under said when asked how a group of twentysomethings is so able to masterfully work in a genre first mined before they were born. In addition to the Cure and the Church, he also cites modern rock outfits like AFI, Placebo and Tiger Army as influences.
"As a whole, we look to the '80s," Under explained. "We did the Warped Tour (in June and July 2007) and we didn't fit in. We don't consider ourselves part of that scene but people definitely get it."
It only helps the Dear & Departed that Under lent his spellbinding vocals on AFI's 2006 release "Decemberunderground."
Having toured with well-known acts such as Avenged Sevenfold and AFI, the members of the Dear & Departed have found themselves the rare young rock troupe able to appeal to fans from several generations.
Under is excited that young fans are embracing the Dear & Departed, and he even salutes the sounds of "Down Under" with a moving version of the Church's 1987 classic "Under the Milky Way Tonight" that has him sharing vocals with fellow Australian singer Jessica Origliasso of the Veronicas.
"I was listening to a lot of the Church before we started to record ('Something Quite Peculiar'). It's such a timeless song; more people need to hear it."
Posted by Robert Kinsler at 10:52 AM