Happy Monday everybody. Here is your roundup of rock 'n' roll-minded news to kick start the week... 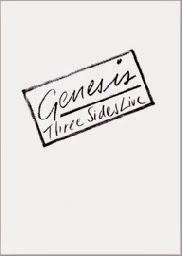 New York, NY (September 8, 2014)—On November 4, 2014, Eagle Rock Entertainment will release Three Sides Live by Genesis.  This is a simultaneous release on DVD and Blu-ray. Eagle Rock is delighted to make this concert film available for the first time as a standalone DVD and for the first time ever on Blu-ray. Three Sides Live includes the hits “Turn It On Again,” “Misunderstanding,” “No Reply At All,” “Abacab,” “Man On The Corner,” and more.
Three Sides Live was filmed in November 1981 on the “Abacab” tour in North America and was originally released on VHS to coincide with the live album of the same name. It has only been released on DVD in the limited edition box set The Movie Box 1981-2007. Originally filmed in 16mm, the footage has now been fully restored and is being reissued as a standalone DVD and Blu-ray for the first time. The show focuses on tracks from the Duke and Abacab albums and the tracks are intercut with behind-the-scenes footage and interviews with the band members.
As always with Genesis, the show is visually stunning and it captures the band in their transition from their progressive days in the seventies through to the hugely successful pop/rock act they became from the mid-eighties onwards. The line-up on Three Sides Live features Tony Banks (keyboards, backing vocals); Phil Collins (drums, lead vocals); Mike Rutherford (guitar, bass, backing vocals) with Daryl Stuermer (guitar, bass) and Chester Thompson (drums).

Genesis have always been great live performers and Three Sides Live is a great addition to any fans collection.

Eagle Rock Entertainment is the largest producer and distributor of music programming for DVD, Blu-Ray, TV, Audio and Digital Media in the world.  Eagle works directly alongside talent to produce top quality, High Definition and 3D programs, both concerts and documentaries, including The Rolling Stones, Pink Floyd, The Who, Queen, The Doors, Jeff Beck, U2, Peter Gabriel, Paul McCartney and Ozzy Osbourne. Eagle is a Grammy Award winning company and has received over 30 multi-platinum, over 50 platinum and over 90 gold discs, worldwide.  Eagle Rock Entertainment has offices in London, New York, Toronto, Paris and Hamburg.