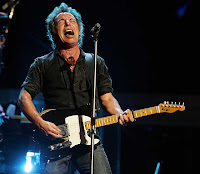 Posted by Robert Kinsler at 8:34 AM No comments: 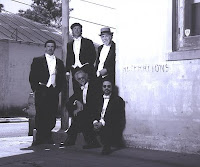 Photo credit: RICK OLIVIER
Since the devastation of New Orleans by Hurricane Katrina in 2005, there has been a well-deserved appreciation and rediscovery of the region's distinctive musical heritage.
Indeed, legendary singer-songwriter Fats Domino is the focus of a newly-released, two-disc collection ("Goin' Home: A Tribute to Fats Domino") with artists such as Paul McCartney, Tom Petty, Lucinda Williams and Neil Young all contributing new recordings in honor of New Orleans' most celebrated musical son.
Another recent recording that highlights the music of New Orleans is the Subdudes' aptly-titled "Street Symphony," a wonderful 12-song set that was released by Back Porch Records in August 2007.
"Street Symphony" is the Subdudes' eighth official release since the group was formed in 1987 when singer-guitarist Tommy Malone teamed with former Continental Drifter singer-keyboardist John Magnie and singer-percussionist Steve Amedee. The group's lineup was completed with the inclusion of Tim Cook (vocals, bass, percussion) and Jimmy Messa (bass, guitar).
Highlights on "Street Symphony" include the Americana-styled rock of "Fountain of Youth," the authentic blues of "Brother Man" and the stirring folk-rock of "Thorn in Her Side."
The first single off the album, "Poor Man's Paradise," is a beautiful but sobering look at the continuing hardships faced by New Orleans residents in the wake of Katrina; the powerful lyrics are set to beautiful soul music that showcases the quintet's enchanting harmonies.
Other recommended releases by the Subdudes include 2006's "Behind the Levee" and 2004's "Miracle Mule."
The Subdudes and Bob Malone will perform at the Coach House, 33157 Camino Capistrano, San Juan Capistrano, at 8 p.m. Friday, Oct. 12, 2007. Tickets are $20.
Information: 949-496-8930.
Posted by Robert Kinsler at 8:06 AM No comments: