Sights and sounds: AC/DC, The Who, John Mellencamp, Nickelback

There is plenty of news as it relates to high-profile new and forthcoming releases, so let's get started…

Columbia Records proudly announces the release of Rock or Bust, the highly anticipated new studio album from AC/DC, available December 2, 2014. Rock or Bust is the band's first studio album in six years and features 11 new tracks.  Rock or Bust follows the immensely successful 'Black Ice' album, which debuted at #1 in 31 countries upon its release in 2008 and has gone on to sell nearly 8 million copies worldwide.  'Rock or Bust' was recorded in Spring 2014 at Warehouse Studio in Vancouver, BC and finds AC/DC once again working with producer Brendan O'Brien and mixer Mike Fraser.
Starting September 27, Turner Sports will provide fans a sneak peek of the new track 'Play Ball' as part of the 2014 Major League Baseball Postseason campaign.  The content will run for several weeks across TBS, the exclusive home to this year's American League Postseason coverage, as well as leading media brands within the Turner portfolio.
'Rock or Bust' is the first AC/DC album in the band's 41 year history without founding member Malcolm Young on the recordings.  Earlier this year AC/DC released a statement explaining that due to illness, Malcolm would be taking a break from the band.  Unfortunately, due to the nature of Malcolm's condition, he will not be returning to the band.  AC/DC will undertake a world tour in support of 'Rock or Bust' in 2015.  Stevie Young, nephew of founding members Angus and Malcolm Young, plays rhythm guitar on 'Rock or Bust' and will accompany the band on tour. 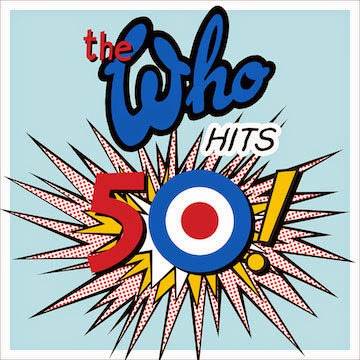 There is no more significant a milestone in Rock Music than the 50th Anniversary. Alongside The Beatles and The Rolling Stones, THE WHO complete the holy trinity of British Rock bands that have the honor of celebrating that landmark. Through the decades, THE WHO redefined rock music as we know it and their influence continues in all areas of popular culture to this day.
WHO HITS 50! is the definitive collection of the band’s greatest tracks from their very first recordings as The High Numbers right up to the present day with the brand new track “BE LUCKY.”
A classic Who rocker, “BE LUCKY” is THE WHO’s first new material in eight years. The track was produced by Dave Eringa best known for his work with the Manic Street Preachers and Wilko Johnson + Roger Daltrey.
Recorded at the end of the summer at British Grove and Yellowfish Studios, “BE LUCKY” features long time Who live players Zak Starkey (drums) and Pino Palladino (bass), with the keyboards being provided by ex Style Council and Dexys sideman Mick Talbot. In keeping with their ongoing support for Teenage Cancer charities, the band have donated their royalties from the song to Teen Cancer America, a charity founded in 2011 by Roger Daltrey and Pete Townshend.
WHO HITS 50! is being released October 27, 2014, on Geffen/Universal Music Enterprises (UMe) to coincide with the band’s 50th anniversary tour of the same name, which starts in Dublin on November 26.
The Who - Who Hits 50!
Disc 1
Zoot Suit – (as The High Numbers)
I Can’t Explain
Anyway Anyhow Anywhere
My Generation
Substitute
The Kids Are Alright
I’m A Boy
Happy Jack
Boris The Spider
Pictures Of Lily
The Last Time
I Can See For Miles
Call Me Lightning
Dogs
Magic Bus
Pinball Wizard
I’m Free
The Seeker
Summertime Blues (live)
See Me, Feel Me
Won’t Get Fooled Again (single edit)
Let’s See Action
Bargain
Behind Blue Eyes
Disc 2
Baba O’ Riley
Join Together
Relay
5:15
Love Reign O’er Me
Postcard
Squeeze Box
Slip Kid
Who Are You
Trick Of The Light
You Better You Bet
Don’t Let The Coat
Athena
Eminence Front
It’s Hard
Real Good Looking Boy
It’s Not Enough
Be Lucky (new song)

AXS TV, cable's premier destination for music entertainment, proudly presents an intimate live performance by John Mellencamp. The Voice of the Heartland will feature a mix of songs from his newly released album, Plain Spoken and classic songs on Saturday, Sept. 27 at 9 p.m. ET/6 p.m. PT. The one-hour event titled "iHeartRadio Icons Live: John Mellencamp," will be broadcast live from his recording studio in Bloomington, Indiana.  It also comes on the heels of his performance earlier this month at Farm Aid 2014, another AXS TV broadcast production, where he performed songs from Plain Spoken and several of his classic hits in the much lauded set.
A Rock and Roll Hall of Fame inductee, Mellencamp has touched the hearts and souls of music listeners and has influenced American Culture with his enduring songs. His 22nd album of original music, Plain Spoken is set to be one of the most distinguished records of Mellencamp's career.
The concert telecast joins AXS TV's eclectic fall concert line-up, which includes two days of live coverage from Zac Brown's Southern Ground Music & Food Festival on October 11 and 12 and the 15-week Tuesday night concert series "The Headliner Club Series Presented by Budweiser" at 11 p.m. ET/8 p.m. PT.
ABOUT AXS TV
Launched in July 2012 by visionary entrepreneur Mark Cuban, AXS TV is dedicated to providing the best in music programming and festivals, comedy performances, current events and mixed martial arts promotions. AXS TV is a partnership between Mark Cuban, AEG, Ryan Seacrest Media, Creative Artists Agency (CAA) and CBS. The network is available in the United States via AT&T U-verse, Charter, Comcast/Xfinity, DIRECTV, DISH, Suddenlink, Verizon FiOS, and other cable, satellite and telco providers. The network is also distributed in Canada, Mexico and the Caribbean. For more information, visit the website, www.axs.tv; go to the Facebook page here and follow the company on Twitter, @axstv; on Instagram;  Tumblr  and YouTube.
AXS TV's companion network, HDNET Movies, is a linear TV channel and VOD service that delivers the ultimate film watching experience -- uncut and uninterrupted -- in high definition. Launched in 2003, HDNET Movies programs a diverse slate of box-office hits spanning the 1950s to 2000s. The network is widely distributed by major cable, telco and satellite TV providers in the U.S. For further information, visit www.hdnetmovies.com.

NICKELBACK to release 'No Fixed Address' on November 18, 2014

Globally celebrated, multi-platinum rock band NICKELBACK will unleash No Fixed Address, their eagerly awaited eighth full-length album and inaugural release for Republic Records on November 18, 2014.
Produced by NICKELBACK, the album’s stand out lead single “Edge Of A Revolution” is soaring up rock radio charts, becoming one of the band’s fastest rising singles. Fans can already purchase the first two singles “Edge Of A Revolution”and “What Are You Waiting For?”.
Listen to “What Are You Waiting For?” here: http://www.youtube.com/watch?v=5QQRfXn1W-s

Bolstered by thudding guitars and stadium-filling prowess that have been the hallmark of NICKELBACK’s sound, “Edge Of A Revolution” highlights the band’s songwriting and sonic evolution as it moves front and center on the anthemic track.  A “Top 5 Greatest Gainer” week after week, “Edge Of A Revolution” recently entered the Top 5 at Active Rock and is shaping up to be another rock radio hit. Upon release the song debuted at #1 on iTunes Rock Singles Chart and Top 25 on the iTunes All Genre Singles Chart. It also debuted at #13 on Billboard’s Hot Rock Songs chart, while claiming #1 on the Hard Rock Digital Songs chart.

The band’s music video debuted worldwide on Yahoo! Music. Helmed by iconic video director Wayne Isham [Metallica, Michael Jackson], the clip captures the song's lyrical call-to-arms with revolutionary energy. Watch it now!
Meanwhile, the second single from No Fixed Address, "What Are You Waiting For?" exploded at iTunes upon its release, quickly reaching #1 on iTunes Rock Singles Chart. The song is set to impact at Pop and Adult Contemporary Radio shortly. Following a long tradition of massive crossover hits from the band, it delivers an unforgettable hook and sing-a-long choruses seemingly built for arenas.
NICKELBACK take listeners to No Fixed Address on November 18.
Since first landing on the scene in 1996, NICKELBACK have cemented themselves as one of the most commercially viable and important acts of the past two decades.  The group’s worldwide sales exceed 50 million units, solidifying their status as the “eleventh best-selling music act” and second best-selling foreign act in the U.S. of the 21st century—behind only The Beatles. Their inescapable and irresistible smash “How You Remind Me” remains Billboard’s “Top Rock Song of the Decade” and “Fourth Song of the Decade”. Amongst all of these accolades, they’ve been crowned Billboard’s “Top Rock Group of the Decade” as well. Along the way, they’ve received a staggering nine Grammy Award nominations, three American Music Awards, a World Music Award, a People’s Choice Award, 12 JUNO Awards and have been inducted into Canada’s Walk of Fame.
BUY LINK:
“What Are You Waiting For?” http://smarturl.it/NickelbackWaitngDA
“Edge Of A Revolution” http://smarturl.it/NickelbackEdgeReviT