Good morning music friends. Is it Friday yet? It is indeed!

Casting Call NoticeCasting Call For 90s/Early 2000's Rock BandsAre you a Los Angeles local or have played in the Los Angeles area during your band's prime?Calling all ROCK, CLASSIC ROCK, POP ROCK and HARD ROCK bands (no hair metal) that played in the 90s or early 2000s in the Los Angeles area. Were you part of a high school or college band in the 90s or early 2000s in the Los Angeles area? Have you dreamed of getting the group back together? Bunim-Murray Productions, producers of Project Runway and The Real World - in association with Rock n Roll Fantasy Camp - is producing a docu-series for a major cable network. We are looking for bands to reunite and perform under the guidance of well-known musicians.  Please send pictures of yourself and the band – along with a brief description of your band and where you and your bandmates are today – to bandcasting@bunim-murray.com.  Must be 21+ to apply.

Guests slated to perform include Brian Wilson, Norah Jones, Brandon Flowers & Mark Stoermer of The Killers, Ann Wilson of Heart, Wayne Coyne and Steven Drozd of the Flaming Lips, Ian Astbury of The Cult, Dhani Harrison and many more. 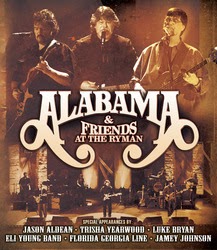 New York, NY (September 4, 2014)—On September 30, Eagle Rock Entertainment will release Alabama & Friends At The Ryman on DVD, DVD/2CD, 2CD, and Digital Formats. It will also be released as a limited edition 2LP. [Pre-book Order Date September 5, MSRP $24.98 DVD/2CD, $14.98 DVD, $17.98 2CD, $29.98 2LP]
Filmed at the historic Ryman Auditorium in Nashville, At The Ryman showcases the superstar band delivering a once-in-a-lifetime concert event, highlighted with on-stage collaborations with some of country music’s biggest names. Luke Bryan, Jason Aldean, Trisha Yearwood, Florida Georgia Line, Jamey Johnson, and The Eli Young Band all contributed to the evening’s festivities, enhancing a set list that already included timeless hits such as “Tennessee River,” “Love In The First Degree,” “Dixieland Delight,” “If You’re Gonna Play In Texas (You Gotta Have A Fiddle In The Band), ” “Song Of The South,” “I’m In A Hurry (And Don’t Know Why),” and “My Home’s In Alabama.”

The DVD version of At The Ryman features not only the 17-song performance, clocking in at 90 minutes, but a wealth of bonus footage. Featurettes “The History and The Night,” “The Making Of Alabama and Friends,” “The Songs and The Stories,” “Influence and Inspiration,” “The Magic Of Alabama Live,” “Performing At The Ryman,” and “Alabama Is…” all include interviews with the band and the show’s guests.
Alabama is an All-American country / southern rock band, originally formed in 1969 founded by Jeff Cook, Teddy Gentry, and Randy Owen. The band’s style, blending traditional country music, southern rock, and elements of gospel and pop music led to massive crossover success, resulting in over 75 million albums and singles sold. The band did their farewell tour in 2003, and reunited in 2011. The current line-up of Alabama (Cook, Gentry, and Owen) has been rolling full steam ahead ever since, arranging the Bama Rising concert in 2011 to benefit homes / businesses affected by tornados in their home state, touring in support of their 40th anniversary in 2014, and releasing theAlabama & Friends tribute album, encompassing duets with newer artists such as Jason Aldean and Florida Georgia Line.
The direct-to-consumer store for Alabama & Friends At The Ryman is now live at http://www.myplaydirect.com/alabama-friends. The D2C store offers not only the various formats, but deluxe audio/video bundles with an exclusive T-shirt!
Alabama Is:
Jeff Cook – lead guitar / fiddle / vocals
Teddy Gentry – bass guitar / background vocals
Randy Owen – lead vocalist / rhythm guitar

For more information on Alabama, please visit:
Website: http://www.thealabamaband.com/
Twitter: https://twitter.com/TheAlabamaBand
Facebook: https://www.facebook.com/Alabama
Eagle Rock Entertainment is the largest producer and distributor of music programming for DVD, Blu-Ray, TV, Audio and Digital Media in the world.  Eagle works directly alongside talent to produce top quality, High Definition and 3D programs, both concerts and documentaries, including The Rolling Stones, Pink Floyd, The Who, Queen, The Doors, Jeff Beck, U2, Peter Gabriel, Paul McCartney and Ozzy Osbourne. Eagle is a Grammy Award winning company and has received over 30 multi-platinum, over 50 platinum and over 90 gold discs, worldwide.  Eagle Rock Entertainment has offices in London, New York, Toronto, Paris and Hamburg.

Follow Eagle Rock Entertainment at:
Facebook:  www.facebook.com/EagleRockEnt
Twitter: www.twitter.com/EagleRockNews
YouTube: www.youtube.com/user/eaglerocktv
Track Listing:
1) If You’re Gonna Play In Texas (You Gotta Have A Fiddle In The Band)
2) Tennessee River featuring Jason Aldean
3) Dixieland Delight
4) Song Of The South
5) One In The World
6) Forever’s As Far As I’ll Go featuring Trisha Yearwood
7) Dancin’, Shaggin’ On The Boulevard
8) Born Country
9) All American
10) Love In The First Degree featuring Luke Bryan
11) The Closer You Get featuring Eli Young Band
12) High Cotton
13) Take Me Down
14) I’m In A Hurry (And Don’t Know Why) featuring Florida Georgia Line
15) That’s How I Was Raised
16) My Home’s In Alabama featuring Jamey Johnson
17) Mountain Music
Posted by Robert Kinsler at 8:29 AM