Exciting news for fans of the wonderful Neon Trees! Here is a release that just landed in my inbox... 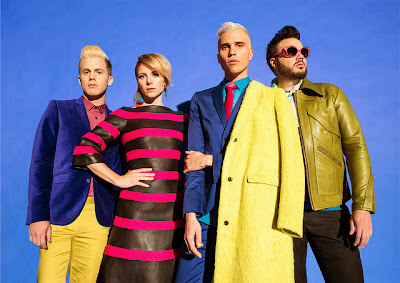 BAND TO STORM THE TV AIRWAVES WITH PERFORMANCES ON LATE NIGHT WITH JIMMY FALLON, TODAY, AND THE TONIGHT SHOW WITH JAY LENO Pop Psychology was recorded throughout 2013 in Cabo San Lucas, Los Angeles, and Provo and was produced and mixed by Tim Pagnotta, who also produced the band's smash hits "Animal" and "Everybody Talks". The new album continues Neon Trees' exploration of new wave, smart pop, and dance music, resulting in their most refined album to date. Pop Psychology boasts infectious alternative synth pop ready for the radio, shower, car and dance floor.

Tyler Glenn says of Pop Psychology, "The album is so special to me personally because it basically started from a place where I was broken and uninterested in anything to do with music. I had reached a breaking point. For me this record is a celebration, a cry for help, an admission of self doubt, and a revelation of self acceptance.  At the very least, it's a pop record, and to me the purest example of the sound of Neon Trees."

Neon Trees will kick off 2014 by storming the airwaves with several confirmed television appearances. On Thursday, January 16th, the band will return to Late Night with Jimmy Fallon followed by a performance the next morning on TODAY. On January 22, they'll return to The Tonight Show with Jay Leno. This spring Neon Trees will hit the road for a massive headlining North American tour. Dates to be announced shortly.

Pop Psychology is the follow up to band's 2012 release Picture Show which debuted at #17 on the Billboard 200 Album Chart and featured the RIAA platinum single "Everybody Talks" which cracked the Top 10 on the Billboard Hot 100 chart. Neon Trees' debut album, Habits, was released in 2010 and featured the platinum smash single "Animal". The band has appeared on The Late Show with David Letterman, Good Morning America, Conan, TODAY, The Ellen DeGeneres Show, The Tonight Show with Jay Leno, Jimmy Kimmel Live, America's Got Talent, and LIVE! With Kelly & Michael. No strangers to the road, Neon Trees have previously toured with Taylor Swift, The Killers, Maroon 5, Duran Duran, Flaming Lips, My Chemical Romance, among others.