Wow, here it is! Here are details on the artists and the official festival poster for the Doheny Blues Festival too. This may be the best lineup in history with a mix of classic rock and blues artists, as well as emerging artists such as Brandon "Taz" Niederauer and Vintage Trouble on the bill...Get tickets and more information here.

BEN HARPER AND THE INNOCENT CRIMINALS
Harper's 2018 release with Charlie Musselwhite was honored with a GRAMMY nod, and now the global star returns to Doheny Blues with his soulful, funky ensemble The Innocent Criminals

LINDSEY BUCKINGHAM
Widely considered one of the greatest guitarists, songwriters and musical expressionists of our time, Buckingham is a a Rock and Roll Hall of Fame inductee, 3-time GRAMMY winner, and best known as the producer, guitarist, vocalist and chief songwriter for Fleetwood Mac and as a celebrated solo artist

TAJ MAHAL QUARTET
A legend who has singlehandedly reshaped the definition of blues music, with his infusion of instruments and exotic sounds from the Caribbean, Africa and the South Pacific

JONNY LANG
At the age of 38, Jonny has been recording chart-topping albums and touring the world for over two decades, led by his gritty vocals and searing guitar work

THE ROBERT CRAY BAND
A true superstar of the music world, Cray has been bridging the lines between blues, soul and R&B for the past four decades, with 5 GRAMMY wins and 21 acclaimed albums

THE MARCUS KING BAND
Marcus may be young at 22 years old, but his eloquent songs, expressive guitar playing, and ecstatically soulful singing mark this gifted, thoughtful young prodigy as a force to be reckoned with

ALLMAN BETTS BAND
Led by Devon Allman and Duane Betts, with new addition Berry Oakley Jr., the new ABB configuration will release a album this spring and tour in celebration of the 50th Anniversary of their parents' legendary band, The Allman Brothers

JOHN MAYALL BAND with Carolyn Wonderland
At 85, the Godfather of British Blues shows no signs of slowing down, with a new record coming, a European tour scheduled and his first female lead guitarist Carolyn Wonderland

REVEREND PEYTON'S BIG DAMN BAND
One of the foremost country blues finger-style pickers, Rev. Peyton and his Big Damn Band hit you like a freight train with their self-titled wildman blues sound

B.B. & THE BLUES SHACKS from Germany
It's the 30th Anniversary for one of Europe's top jump blues bands 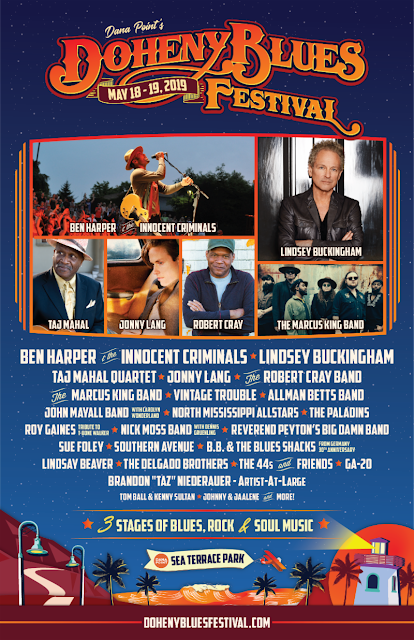 Posted by Robert Kinsler at 7:48 AM