Anyone who has seen Kris Kristofferson perform in concert or is familiar with his incredible songs will be excited to get details about the exciting tribute "The Life & Songs of Kris Kristofferson' coming to CMT next month. Get all the details on the TV special, as well as the concert film and audio recordings set to be released as well... 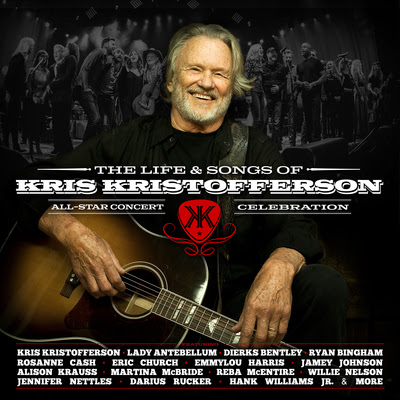 September 28, 2017, New York, NY — Blackbird Presents Records offers another sneak preview from the upcoming concert film and CD/DVD release, The Life & Songs Of Kris Kristofferson. “Sunday Mornin’ Comin’ Down” features Kris Kristofferson joined by longtime friend Willie Nelson. Together they perform the Kristofferson-penned, 1970 No. 1 country hit for their fellow Highwayman, Johnny Cash. Watch it on TASTE OF COUNTRY. Kristofferson also performed the song last week at Nashville’s historic Ryman Auditorium for the Nashville Songwriters Association International’s 50th anniversary celebration, honoring each of the 50 Song Of The Year winners in its history.
“Sunday Mornin’ Comin’ Down” was the first of three NSAI Song Of The Year winners Kristofferson penned, and he is one of only two songwriters to ever write as many. The song is currently available to stream and download at most online outlets HERE.
As previously announced, CMT will premiere the 90-minute broadcast on Friday, October 27 at 10 PM ET and Blackbird Presents Records will release the full-length concert film as a CD/DVD combo on the same day. The Life & Songs Of Kris Kristofferson CD/DVD and official concert merchandise is available for immediate preorder via Blackbird Presents at http://songsofkristofferson.com
In addition to the CD/DVD release fans can get exclusive merchandise from PledgeMusic (http://pledgemusic.com/projects/songsofkristofferson) including a limited edition framed gig poster from the night of the show, color photo, and an Epiphone Ltd. Ed. 1963 J-45 guitar, all signed by Kris Kristofferson.
The Life & Songs Of Kris Kristofferson features captivating performances, in-depth interviews, and compelling behind-the-scenes footage with Kris Kristofferson, Jessi Alexander, Lady Antebellum, Dierks Bentley, Ryan Bingham, Rosanne Cash, Eric Church, Jessi Colter, Rodney Crowell, Larry Gatlin, Emmylou Harris, Jack Ingram, Shooter Jennings, Jamey Johnson, Alison Krauss, Martina McBride, The Travelin' McCourys, Reba McEntire, Buddy Miller, Willie Nelson, Jennifer Nettles, Jon Randall, Darius Rucker, Hank Williams Jr. and Lee Ann Womack. Performances include a range of Kristofferson classics, such as "Me And Bobby McGee" (performed by Reba McEntire), "Help Me Make It Through The Night" (Performed by Lady Antebellum), "To Beat The Devil" (Performed by Eric Church), a very special performance of "Sunday Mornin' Comin' Down" (performed by Willie Nelson and Kris Kristofferson), and an all- star grand finale performance of "Why Me."
Kristofferson, a Country Music Hall of Fame inductee, is considered a true poet who helped modernize the genre with songs such as "Sunday Mornin' Comin' Down," "Help Me Make It Through the Night," "Me and Bobby McGee" and "Lovin' Her Was Easier." These are the songs of heartbreak and despair, of love and loss, of yearning and hope. These are the songs so honest that we adopted them as our own. They are the songs of a life led unlike any other: An All-American athlete, Golden Gloves boxer, Army Ranger, helicopter pilot, singer-songwriter, social activist, humanitarian and movie star.
Keith Wortman is creator and executive producer of the show. GRAMMY® Award-winner Don Was served as music director alongside country music legend Buddy Cannon. An all-star band that included featured artist and GRAMMY® Award-winner Buddy Miller backed the performers at this incomparable concert event taping.
FOR COMPLETE DETAILS VISIT THE OFFICIAL WEBSITE:
http://songsofkristofferson.com
#songsofkristofferson
###
About Blackbird Presents
Blackbird Presents is a global media company that produces premium content via a range of strategies including large-scale concert events and festivals, broadcast series and specials, and music releases featuring major music stars across all genres and demographics.
Blackbird's recent concerts, broadcast specials and releases include "Sing Me Back Home: The Music of Merle Haggard," "The Life & Songs of Kris Kristofferson," "Imagine: John Lennon 75th Birthday Concert," "Outlaw: Celebrating The Music of Waylon Jennings," "I'll Take You There: Celebrating 75 Years of Mavis Staples," "The Life and Songs of Emmylou Harris," "Lynyrd Skynyrd: One More For The Fans," "The Musical Mojo of Dr. John: Celebrating Mac and His Music," and "All My Friends: Celebrating The Songs and Voice of Gregg Allman," the latter of which earned a 2014 GRAMMY® Award nomination for Gregg Allman and Taj Mahal's awe- inspiring performance of "Statesboro Blues."
Blackbird Presents is also creator and producer behind the Outlaw Music Festival Tour, in partnership with Willie Nelson; the American Roots Music & Arts Festival, in partnership with Eric Church; and The Last Waltz 40 Tour.Visit us at http://blackbirdpresents.com
About Kris Kristofferson
Kristofferson is a Country Music Hall of Famer who ranks among the most versatile of American talents. He's been a Golden Gloves boxer, a Rhodes scholar, a college football player, an acclaimed actor, a military officer, a helicopter pilot, a GRAMMY® winner, and an icon. It was the singing and the writing that called to him. He wound up penning classics including "Me and Bobby McGee," "Help Me Make It Through the Night," "Sunday Mornin' Comin' Down" and "For The Good Times," as well as a slew of other empathetic, incisive gems. Kristofferson— along with contemporaries Tom T. Hall, Mickey Newbury, Willie Nelson and John Prine— enhanced the scope of country music songwriting, focusing on layering, nuance, empathy and emotional truth. Once established, he quickly became one of music's most charismatic and intriguing figures. Kristofferson went on to a prolific acting career with roles in "A Star is Born," "Alice Doesn't Live Here Anymore," "Blade" and many more films.
About CMT
CMT is the leading authority on country music and lifestyle, offering a mix of original series, music events and specials. CMT is everywhere its fans are including two cable channels (CMT and the 24-hour music channel, CMT Music), radio (CMT Radio), digital (CMT App, CMT.com) and social (CMT on Facebook, CMT on Instagram and CMT on Twitter). CMT is a unit of Viacom Inc. (NASDAQ: VIA, VIAB). For more information, please visit CMT Press.
2-CD TRACKLISTING: