The lineup for the 12th Annual Stagecoach Festival is pretty amazing, with a mix of strong Americana, modern Country and roots rockers staged to take over Indio, California April 27, 28 and 29, 2018... 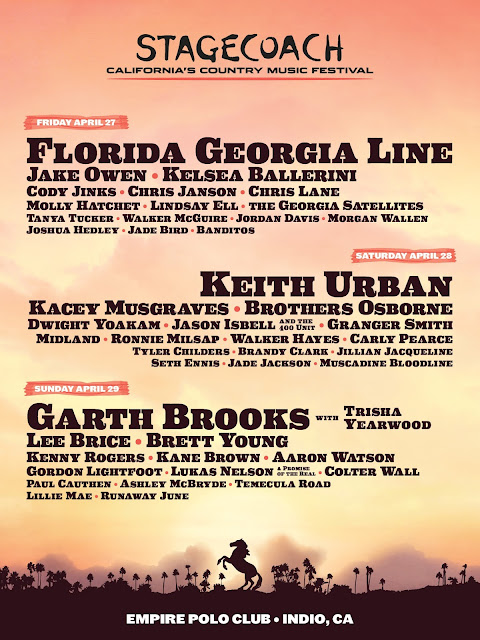 "Everyone knows STAGECOACH is the biggest country festival in the world, we are coming with the sole purpose of making it the biggest party on the planet!" – Garth Brooks

“We love Stagecoach, we’ve played there several times so to be headlining – we could not be more excited.  We’re gonna throw the biggest party of the year.  I hope you all are ready”
– Florida Georgia Line

LOS ANGELES, CA - September 13, 2017 – This year, you ‘aint seen nothing yet.  Get ready for the biggest country music event ever staged.  In 2018, the songs you sing, the food you crave, and the people you love take center stage as STAGECOACH returns Friday, April 27 through Sunday, April 29 for the festival’s 12th edition at the Empire Polo Club in Indio, CA. Multi-platinum duo Florida Georgia Line will headline Friday of the festival to lead into four-time Grammy Award winning Keith Urban’s Saturday performance while, in a rare festival appearance, Garth Brooks will close out Sunday.

New to the festival this year, Stagecoach will be introducing SiriusXM’s Spotlight Stage to highlight today’s up-and-comers; artists like Carly Pearce, Ashley McBryde, Seth Ennis, Runaway June, Jordan Davis and more, while an updated HonkyTonk Dance Hall is set to feature even more DJs. SiriusXM will also broadcast live from the festival, featuring performances and interviews.

The festival will also be adding car camping for $179 as a lower budget option for attendees looking to stay closer to the music.

Now with a bigger culinary focus, look for a mouth-watering BBQ experience with craft beer and craft cocktails plus additional fare that will surprise.  Pass holders will enjoy a diverse array of choices that go far beyond traditional barbecue while keeping with the classics: brisket, ribs, pulled pork and more. Look for exciting culinary announcements including a list of chefs, pit masters and restaurants on our website and social channels.

Festival passes go on sale Friday, September 22 at 11 AM PDT at stagecoachfestival.com.

All taxes, domestic shipping and fees are included in listed ticket prices. Pay in full or choose the Stagecoach Payment Plan to pay in five equal payments from September 22 through January.  RV Resort, Car Camping and parking options will also be available online for purchase, with Travel Packages and Shuttles available via Valley Music Travel.

STAGECOACH is produced by Goldenvoice and The Messina Group
Posted by Robert Kinsler at 2:10 PM