Cheap Trick guests on 'The Big Interview' on October 9

Always nice to see Rock and Roll Hall of Famers Cheap Trick getting some attention. One of America's all-time great and enduring rock bands...


Cheap Trick discuss how they unexpectedly became famous in Japan in this first-look clip at a new episode of 'The Big Interview,' airing Wednesday, October 9 at 8 p.m. Easter/5 p.m. Pacific
Watch it here - Here 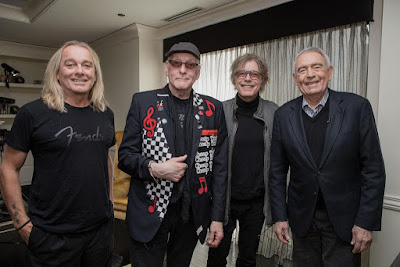 Cheap Trick original members Robin Zander, Rick Nielsen and Tom Petersson sit down with Dan Rather for an all-new episode of The Big Interview—airing Wednesday, Oct. 9 at 8pE/5pP. During the conversation, the 2016 Rock and Roll Hall of Fame inductees talk about their early success, signature hits and why after 45 years together, they’re still touring and making new music.
In this exclusive first look, Zander, Nielsen and Petersson discuss their surprising early popularity in Japan, before breaking out in the United States.
“We started getting fan mail from Japan,” said Nielsen, “because of the Japanese press talking about us at a Queen show…. Normally they wouldn’t mention the opening act.”
“In Japan, they have these comic books,” Zander continued, “and they’re thick ones and Queen and KISS were always in there. And all of a sudden, we were in there as like their young brothers. So that helped promote us in Japan before ‘[Cheap Trick at] Budokan’ even came out.”
“They kind of like that quirky cartoon character thing going on,” said Petersson, “which Queen has, which KISS certainly has. We were like cartoon characters. None of the other audiences, our record company in the states and stuff, they thought ‘boy this is too weird.’ But the Japanese, they got a kick out of it. That’s how they learned English. They listened to records over and over and learned how to pronounce English words. It’s kind of demented nursery rhymes.”
“Not everyone in rock during that time was in these comic books,” said Zander, “It had a lot to do with the caricatures of ourselves, but the music had to be there too.”
The Big Interview airs every Wednesday at 8pE/5pP, only on AXS TV, as host Dan Rather joins a roster of iconic entertainers for candid conversations, providing a unique glimpse into their personal lives, defining moments and incredible careers.
Don’t miss legendary chart toppers Chicago as Rather sits down with two of the band’s founding members, Robert Lamm and Lee Loughnane, next Wednesday, Oct. 16, for a conversation about the longevity of their career and unforgettable music.
About AXS TV
Launched in 2012 by visionary entrepreneur Mark Cuban in conjunction with AEG, AXS TV has established itself as the premier destination for music and entertainment programming, and is the newest addition to the Anthem Sports & Entertainment portfolio. The network delivers an eclectic programming roster that includes original series, live concerts, music documentaries, live wrestling and mixed martial arts. AXS TV is currently available nationally in the United States and parts of Canada, Mexico and the Caribbean. For a list of providers, visit www.axs.tv/subscribe.  For more information, visit www.axs.tv.
Posted by Robert Kinsler at 5:42 AM