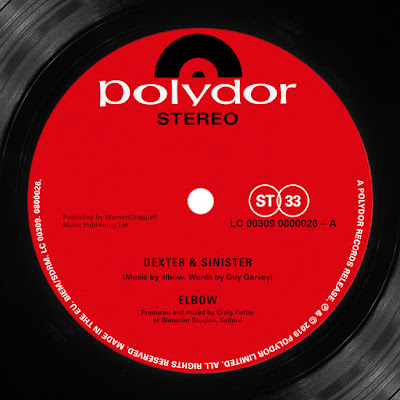 ‘DEXTER & SINISTER’ LISTEN
elbow has returned today with a spellbinding 7-minute track titled ‘Dexter & Sinister,’ out now on Verve Label Group in North America. The track is available across all digital platforms as well as on limited edition one sided 10” vinyl with lyric etching on the B-side [buy HERE]. Listen HERE.

Featuring guest vocals from Jesca Hoop, Dexter & Sinister’ is an epic melding of ominous, creeping grooves and deity denying lyrics that bursts into a sweeping second phase of lament and redemption. Initially recorded at Clouds Hill Studios, Hamburg, a building crammed with old, beautifully preserved, analogue equipment that encouraged the band to experiment and play live in the room, an essential part of its genesis according to keyboardist and producer Craig Potter: ‘We haven’t sat around and played like that in a long time. The looseness in the track definitely comes from us playing live in the room and, on the second part, we decided not to play to a click to really allow the tune to breathe.”

The track takes its title from heraldry where Dexter (Right) and Sinister (Left) represent the two sides of an escutcheon bearing a coat of arms. ‘Dexter & Sinister’ is, in lyricist and singer Guy Garvey’s own words: “A great, big, bewildered question dealing with my feelings on Brexit, the loss of family and friends and the general sense of disaffection you see all around at the moment.”

Two songs in one song, two countries in one country, divided by that ongoing question over the UK’s future, and hope at life and despair at death in equal measure. ‘Dexter & Sinister’ is out everywhere now.

In other news, elbow recently inked a deal with the legendary Verve Label Group for North America.