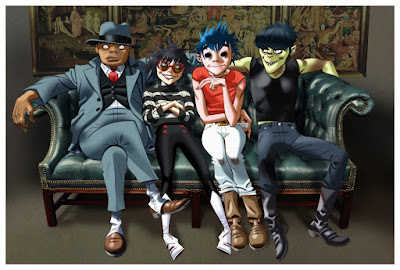 Great news for a Friday with yesterday's announcement that Gorillaz are set to return with a new full-length album on April 28, 2017! Titled Humanz, the new album features the "virtual band" led by Blur leading man Damon Albarn and collaborator Jamie Hewlett.

Gorillaz has been mostly quiet since 2011, so it's fantastic to see their official return is now official. The icing on the cake of the news about the upcoming album is a six-minute video titled "Saturnz Barz," which not only features that song but parts of three other album tracks too!

Here is the official standalone video for the cosmos-minded song "Andromeda":

The album was recorded in Paris, London, Chicago, New York and Jamaica. For those lucky enough to be on the other side of the Atlantic, Gorillaz will headline their Demon Dayz Festival in Margate, England on June 10, 2017. There are a number of notable big names who guest on the new album too.

Here are details about the track listing for Humanz: