Ringo Starr and His All Starr Band shine in Costa Mesa 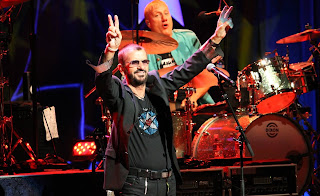 On a night when Donald Trump and Hillary Clinton blew a long-standing tradition of candidates being nice to each other at the annual Alfred E. Smith Memorial Foundation Dinner in New York, wasn't it the perfect alternative to be on the other side of the country in a room filled with peace, love and Ringo Starr and His All Starr Band performing a two-hour concert that delivered at every turn.

Performing before a capacity crowd at Segerstrom Center for the Arts in Costa Mesa, CA, this was an event that allowed Beatles and rock 'n' roll lovers of all tastes to indulge in a true retreat from the troubles of today. The former Beatles drummer/singer-songwriter led his terrific band comprised of truly talented players on a magical mystery tour of not only his most beloved Fab Four hits, but rock radio staples featuring the other members of his troupe. Starr could well do shows alone, singing his wealth of Beatles and solo hits for 90 minutes and please the faithful. But over the years his All Starr Band tours have become beloved for the diversity of rock and pop sounds, good vibes and camaraderie of the musicians who are like family.

After opening with the Carl Perkins classic "Matchbox," Starr asked "Are you ready to have some fun? Are you ready for some good music?"

So while Starr was featured on classics such as the country-styled "What Goes On" and driving rocker "I Wanna Be Your Man" (both showcasing his early work with the Beatles), as well as "It Don't Come Easy" and "Photograph" (the latter two his most enduring solo career gems, both co-penned with Beatles guitarist George Harrison), it was downright cool to see Starr behind the kit as Todd Rundgren sang his wonderful 1972 hit "I Saw the Light" (which featured some shining tandem lead guitar work from Rundgren and Toto's Steve Lukather), a grooving take on Toto's "Africa" and downright hard rocking version of that band's "Hold the Line" and several Santana classics featuring that band's singer-keyboardist Gregg Rolie. The far-flung range of classics performed added to the festive and special spirit of the night. 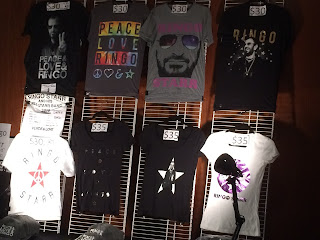 Starr's keen sense of humor, well-known glowing personality and love of music of all kinds was showcased, particularly during a deeply affecting performance featuring Richard Page (of Mr. Mister fame), whose 2010 original "You Are Mine" allowed the ensemble to display how masterfully they could perform a song via lush and textured layers.

Among the Starr-focused songs that impressed were a wistful "Don't Pass Me By," bona fide sing-along "Yellow Submarine," affecting "You're Sixteen," and a celebration-filled closer "With a Little Help From My Friends" that segued into a bit of John Lennon's "Give Peace a Chance."

It would be criminal to not mention drummer Gregg Bissonette and multi-instrumentalist/singer Warren Ham, whose collective contributions were as important as the five featured singers on the stage. A wonderful and memorable night that celebrated not only the most beloved drummer in rock, but the enduring spirit of peace, love and good music that Starr continues to cast in an uncertain world.

Posted by Robert Kinsler at 8:33 AM