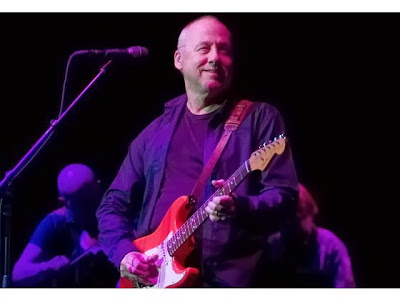 Mark Knopfler kicked off a handful of California dates Wednesday night, Oct. 23, 2013, with a performance at Long Beach Terrace Theater that for two magnificent hours displayed his singular skills as a fingerstyle guitarist, expert songwriter and artful, genre-blending craftsman.
Set list: Mark Knopfler at Long Beach Terrace Theater
Main set: What It Is / Corned Beef City / Privateering / Father and Son > Hill Farmer's Blues / I Used to Could / Kingdom of Gold / Romeo and Juliet / Gator Blood / Haul Away / Postcards from Paraguay / Marbletown / Telegraph Road
Encore: So Far Away / Our Shangri-La / Going Home (Theme of the Local Hero)
Next: The veteran singer-songwriter and guitarist plays again Oct. 26 at the Wiltern, 3790 Wilshire Blvd., Los Angeles
How much: $55.50-$156
Call: 888-894-6185
Online: livenation.com
Although his distinctive baritone vocals were often buried a bit too deep in the mix, Knopfler’s guitar and the equally impressive virtuosity of his seven-man band shined throughout a show comprising some choice Dire Straits songs amid more than a dozen other selections. Touring in support of his inspired new double-album, last month’sPrivateering, the 64-year-old Glasgow, Scotland, native didn't have to worry about whether to include more of his biggest hits.
Indeed, after hearing this sterling 16-song set, few in the crowd seemed concerned that Dire Straits favorites like “Money for Nothing” and “Sultans of Swing” were no-shows. Instead, fans in Long Beach were immersed in a musical world in which rock, Americana, jazz, folk and worldly flavors are all treated as natural complements. (Knopfler plays again Saturday night at the Wiltern in Los Angeles.)
The opening selection, “What It Is,” immediately established that sonic approach, with Knopfler’s electric handiwork fused to a rock groove layered with Mike McGoldrick’s Irish flute. The second song, “Corned Beef City,” was rooted in deep blues, the star contributing alluring slide-guitar parts. Traditional Celtic folk was the focus of his latest title track, during which Knopfler’s astounding fingerpicking on acoustic guitar matched magically with John McCusker’s fiddle.
While the group focused primarily on newer material, its leader chose several classics worth highlighting. “Romeo and Juliet,” a Dire Straits gem off 1980’s Making Movies, was several minutes longer than on the studio version, dreamily reworked with rich layers of piano and saxophone and extra guitar textures. Knopfler’s voice was especially expressive for this one, delivering the love-struck but hard-bitten tale with varying tonal degrees that maintained the power of the piece from start to finish.
Another epic, “Telegraph Road,” ended the main set, with Jim Cox’s piano chief among instrumentation that provided a stately backdrop for Knopfler’s extended and far-reaching fretwork.
The crowd-pleasing encore launched with a straightforward reading of another Dire Straits favorite, “So Far Away,” enriched here by full harmonies. That was followed by the expressive folk ballad “Our Shangri-La” and the winsome, vocal-free powerhouse “Going Home,” his memorable, now 30-year-old theme from the beloved Scottish film Local Hero.
It was another welcome (if sadly final) opportunity this night to hear Knopfler’s unique, still-remarkable guitar playing.
Photo: Joshua Sudock, Orange County Register
Posted by Robert Kinsler at 2:32 AM