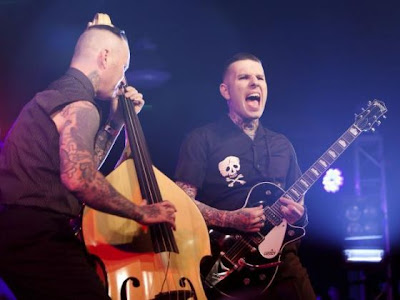 
My review was originally posted on The Orange County Register's Web site on Saturday, March 3.

What a difference a voice makes. Having a great bunch of songs helps, too.

Tiger Army may share a psychobilly sound with the Howlers and the legendary Guana Batz, the two acts that opened for the group Friday night (March 2, 2012) at the launch of the annual Musink tattoo and music convention at the OC Fair & Events Center. But there is little doubt who owned the musical side of things during this first of three festival days in Costa Mesa.

Armed with a vocalist who likely would have been a success no matter what genre he fell in love with, plus a selection of tunes ranging from blistering punk to pumped-up rockabilly and plenty of country- and blues-tinged stuff, the NorCal-bred, SoCal-based trio — singer-guitarist Nick 13, stand-up bassist Geoff Kresge and drummer James Meza — celebrated their craft with every moment of their 90-minute set.

“Cupid’s Victim” was another compelling entry, the group roaring at full force while Nick sang with resonant emotion. Without his singular voice and the textured approach from everybody in the trio, it’s unlikely that Tiger Army’s distinctive style of muscular music and gothically romantic lyrics would work. They were so good, in fact, that even a mostly faithful cover of Eddie Cochran’s classic “Twenty Flight Rock” exploded as if it had just been conceived.

But the highlight of Tiger Army’s turn — which will be followed by tonight’s New Found Glory/Yellowcard-led roster and a Sunday lineup capped by Alkaline Trio and Against Me! — was the original tune “Pain.” That track came across like a blend of modern-day Social Distortion and early-’80s Stray Cats, boasted by Nick 13′s potent vocals and a dynamic arrangement fully developed by the trio of musicians sharing the stage.

It’s unlikely that even on their best nights Guana Batz or the Howlers could compete with such a roar.
The former, a pioneering psychobilly quartet founded 30 years ago by Englishman Pip Hancox, showcased its strong points: Hancox is an energetic singer and he was aided in spades by guitar virtuoso Gino Meregillano. But it isn’t a great night when a mostly spot-on version of Billy Idol’s “Rebel Yell” is a band’s best offering.
Originals such as “Love Generator” and the ska-tinged “Wondrous Place” were performed with might, yet ultimately didn’t infuse the night with much excitement. The troupe ended on a high note, finally getting the crowd into its brand of rock ‘n’ roll with one of its best-known songs, “King Rat.”

The Howlers have a bigger lineup, five players in all, but rather than forging into the concert with strength in numbers, the Southern California outfit’s half-hour set initially came off a muddled mess. The quintet improved as they went along, however, and by the end they effectively delivered a strong “Watch the World Die” (with some effectively minimalist guitar work) as well as the screaming “Follow the Wolf.”

Photo by Drew A. Kelley, for OrangeCounty.com.
Posted by Robert Kinsler at 8:00 AM