Bringin' on the heart rate; hanging out with Phil Collen 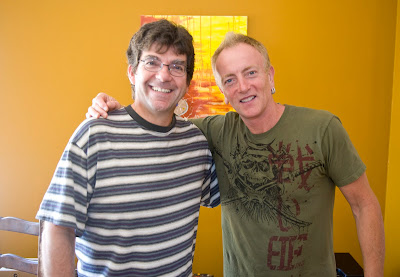 Bringin' on the heart rate

Hard rockers can get as soft as a love ballad as they age. Not O.C. resident Phil Collen of Def Leppard.

Phil Collen is definitely not your average rock star. As a long-time member of the pioneering British hard rock band Def Leppard, he has spent most of this summer on tour, playing guitar before thousands of cheering fans on stages around the globe.
But the 53-year-old London native, who has lived in the same quiet South Orange County neighborhood for 21 years, is attracting as much attention nowadays for his impressive physique and motivational appearances where he demonstrates how easy and important it is to get in shape.

He recently invited the Orange County Register to come visit his home in Laguna Hills, which only immediately stood out when we walked up the driveway and spotted the serious workout equipment in the garage. Once Collen welcomed us inside, there were a couple of amplifiers and a colorful Jackson electric guitar along a wall.

Collen, whose early years were spent growing up in London's tough East End, was willing to share the trials and triumphs of being in a world famous rock 'n' roll band, including the band rallying around drummer Rick Allen when he lost his left arm in a car accident in late 1984 and the tragic death of Collen's close friend and fellow Def Leppard guitarist Steve Clark in 1991. But one thing that has been a positive in Collen's life for more than two decades is the comfortable home positioned on a hill high over the San Diego Freeway that he shares with his wife Helen, 21-year-old son Rory and the family dogs, Jackson and Shaq.

"I was in New York (with) my ex-wife," Collen recalls of his move to Orange County. "My son was born in New York City; as soon as he was born I thought I didn't really want to be in a (big) city with a kid. His grandparents actually lived in this area, so we had a look at it and this was actually the first house we walked into ... I actually looked at 20 or 30 afterward, this was perfect and still is."

Those who check out Collen when Def Leppard headlines at Jack's Sixth Show at Verizon Wireless Amphitheater in Irvine on Saturday, Sept. 10, will see that the lead guitarist is not only playing rock radio hits such as "Photograph" and "Rock of Ages" better than ever, but he continues to exhibit the kind of rock-hard body that is at odds with the so-called rock 'n' roll lifestyle he knew while he was in his early twenties.

"I saw it not being a very positive thing," Collen said of his decision to stop drinking in 1987, just before the band's "Hysteria" tour.
"You're in your twenties and having a great old time. Not remembering what I had done and all that stuff ...The main thing (about stopping drinking) was getting two extra hours in a day. I was getting so (messed) up before, I was recovering (two hours every morning)."

Collen had already become a vegetarian in 1983, shortly after joining Def Leppard.
"It's very much about doing your own thing and not bowing to peer pressure. I never smoked cigarettes; I used to be an asthmatic as a kid. I just always at a certain point started doing what I wanted to do and not worry about what else everybody thinks," he said. "I just didn't like the idea of eating dead stuff."

PUTTING IN THE TIME
But Collen's vegetarian and alcohol-free diet don't fully account for his sleek and muscled frame. That comes from his daily workouts that are a mix of cardio, weightlifting and martial arts. He gives much of the credit to his long-time trainer Jean Carrillo, who has trained a number of Muay Thai kick-boxing champions.
"He (Carrillo) knows about nutrition and everything," Collen said. "We've been experimenting for the last 6 or 7 years how far you can push it. People say 'Why do you do that?' I'm the only guy not limping. I get up in the morning and can kick straight up in the air. And I think that's just consistency. And that's why I do it; it makes me feel like a teenager. And I honestly just feel great. But they say 'The time you put in...' I say the time I put in is less than the time you put into (going to) the doctor's office. I know this because a lot of my friends are 10 or 15 years younger than me have back problems, this that (other ailments), it happens to everyone."

Collen understands many people don't have the time or access to hire a trainer, but says everyone can do something.
"There is a pecking order of things. Most people want to lose weight. To lose weight, you do cardio. You don't do isolation exercises like dumb bell curls or crunches. You won't even see that until the fat gets removed. Walking is great to start with. Biking is great because it's low impact. Again, it's a catch-22. You're a bit heavy, so you're putting so much stress on your back, your knees and your ankles, so therefore you want to do something low impact. A spinning class is brilliant and you just build it up," explained Collen.
Collen plans to issue a DVD designed to help inspire and demonstrate how easy it is to get fit.
"We're talking about it now. It's going to be called 'Physical Mechanics' and it's a three-tier system. It's like a workout for someone who couldn't do one push-up without hurting himself. It does involve walking. You don't need any workout equipment."
The future continues to be a bright one for Collen. He is looking forward to performing with Def Leppard this summer in support of the band's new album Mirror Ball: Live & More, and also hopes to perform some club shows with his side project Man Raze (which issued its second album punkfunkrootsrock on Aug. 2 and will play at the Roxy in Hollywood on Sunday, Oct. 2, 2011).

Posted by Robert Kinsler at 2:44 PM