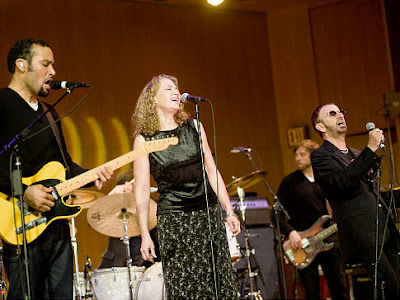 The upcoming episode of 'Live from the Artists Den' on PBS-TV features a performance by Ringo Starr with Ben Harper and Relentless7, as well as special guest Joan Osborne.

With Ringo Starr having just celebrated his 70th birthday on July 7, what better way to celebrate the legendary drummer-singer-songwriter than by tuning into watch him headline on the season premiere of “Live from the Artists Den” on public television this weekend.
Los Angeles’ KLCS-TV will air the episode, which kicks off the second season of “Live from the Artists Den.” In addition to Starr performing with Ben Harper and his band Relentless7, Joan Osborne provides additional backing vocals. If you live in Southern California, you can catch that episode at 10 p.m. on Sunday night, July 11.

I recently was able to view the show, taped at The Metropolitan Museum of Art in January 2010, and the concert finds the former Beatle in a decidedly-introspective mood. The loose and rollicking concert selections are the main draw, but the interviews with Starr (and those where he and Harper discuss their concert collaboration together) are equally illuminating.

“We’re still being fulfilled as musicians,” Starr says. “The beat goes on.”

The set starts with the troupe performing Starr’s hit “Photograph.” But with Harper and Relentless7, the band’s blues-folk-funk brew gives that song and those that follow a bit of an energetic twist to the set. In particular, Ann-Marie Calhoun’s fiddle provides sonic prose and layers around Starr’s distinctive vocals. And Harper’s fiery guitar playing does the same, notably when Starr celebrates the early days of the Fab Four with a raucous “I Wanna Be Your Man.”
Harper also gets to showcase his own material on the music special, particularly with the one-two punch of the beautiful “Faithfully Remain” and art house rocker “Up To You Now.”

While the episode definitely celebrates the enduring legacy of the Beatles, discerning music fans will also find plenty to admire in how the performers find plenty of new emotional territory to explore in Starr’s solo material, particularly the Americana-tinged “Walk With You” and power pop gem “It Don’t Come Easy.”
If you are a fan of Ringo Starr, or Ben Harper, tune in and turn the volume up.
Posted by Robert Kinsler at 8:14 AM