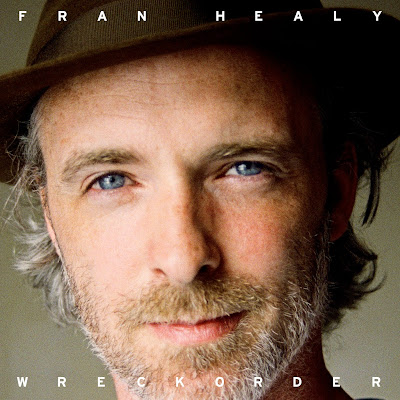 Last night, I caught Fran Healy (of Travis fame) open for Keane at the Greek Theatre in Los Angeles. He performed several Travis songs (including a great version of "Driftwood"), but also played several wonderful new songs that are headed for a solo debut scheduled to be released in the fall. Here is the media release on that album. Based on the strength of the outstanding new songs he played last night (notably "As It Comes"), I can't wait to hear Wreckorder when it comes out Oct. 5, 2010.

Fran Healy, lead singer and main songwriter of acclaimed Scottish rock band Travis, is excited to announce the release of his debut solo album WRECKORDER. Set for an October 5, 2010 release on Ryko, Healy’s first release on the label, WRECKORDER is the work of a quintessential pop songwriter. Known for songs such as “Sing” and “Why Does It Always Rain On Me,” among other hugely successful tracks, Healy has been recognized by Q Magazine, Rolling Stone, and NME, amongst others, for what Entertainment Weekly calls “a gorgeous mosaic of shimmering guitar pop.” Artists such as Coldplay, Noel Gallagher, The Doves and Gomez have cited Healy’s sophisticated and atmospheric arrangements as a major influence on their own sound.


Recorded in Berlin , New York and Vermont, the 10 tracks that make up WRECKORDER are as exceptionally literate as they are emotionally challenging. The collection of songs includes the Neko Case duet “Sing Me To Sleep” which bounces over warm melodies and a syncopated drum loop, the soaring “In The Morning,” the playful but serious “Moonshine,” and the dramatic waltz of “As It Comes” which features Paul McCartney on bass. The end result is the sound of a songwriter who embodied the spirit of Britpop and continues to artistically evolve.

Healy began his North American tour with Keane Tuesday, July 20th, in Oakland , CA. The dates will see Healy performing this new material, as well as classic Travis songs, in a solo acoustic setting. In addition, Healy will play solo acoustic shows along the West Coast. Tour dates below.

beautiful blog..pls visit mine and be a follower.. thanks and God bless..