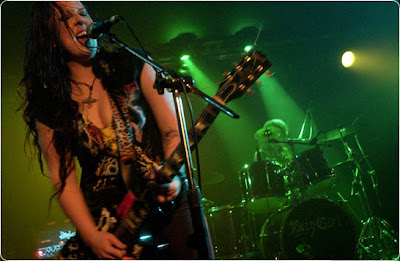 For those of us who live in Orange County, the good news is that bands going on tour that land in Los Angeles increasingly offer up shows behind the OC too.
March and April 2010 offer up plenty of great shows. While we'll have to drive to Hollywood to see Sir Paul McCartney or head east to see Muse, Devo, Band of Skulls and tons of others at the Coachella fest in Indio April 16-18, there will be plenty of concert choices in our own backyard.
Things kick off tomorrow, March 2, when the Australian sister/brother duo BugGiRL (Amber and Clinno) perform at Fitzgerald's Pub, 19171 Magnolia St., Huntington Beach. Since forming in 2004, BugGiRL has performed throughout Europe, North America and their native land Down Under. They are touring in support of their latest release, the five-track EP Blood, Sweat & Beers. This record, the band's third, is described in a press release as "a blast of fearless rock 'n' roll."
If you don't catch the band in Huntington Beach on Tuesday, they play in Banning, CA on March 3.
Information: http://www.buggirl.net/.
One of my favorite power-pop bands of the '90s, the Gin Blossoms, will return to The Coach House in San Juan Capistrano on Saturday night, March 27. Also on the bill is one of OC's best Americana outfits, The Fallen Stars.
Also coming to the Coach House is Australia's The Church. The legendary band, which formed in 1980 and is best known for its 1988 hit "Under the Milky Way," is kicking off its tour of the U.S. as part of the band's celebration of its 30th year together with this special acoustic-styled show.
Finally, for those not making the trek out to Coachella next month, Canadian singer-songwriter-guitarist Bruce Cockburn is headlining at the Coach House on Friday, April 16.
For more information on any of the upcoming concerts at The Coach House, visit http://www.thecoachhouse.com/ or call the venue at 949-496-8930.
Posted by Robert Kinsler at 1:45 PM