The Zombies celebrate 40 years of 'Odessey and Oracle'

The Zombies are truly one of the great bands to come out of the 1960s. I wanted to share this news with all the other fans of this great band. 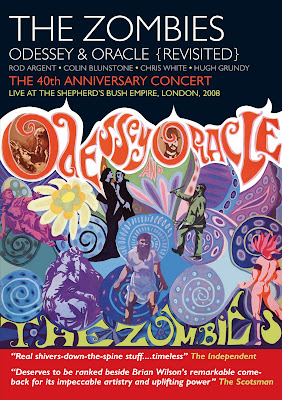 During March 2008, The Zombies performed their legendary 1968 psychedelic album Odessey and Oracle for the first time in 40 years since its original release.

The band played three consecutive sold out concerts at the London Shepherds Bush Empire. One of these nights was filmed for this DVD.

Mixed in 5.1 Surround Sound and boasting an exclusive 2008 filmed interview with the entire band, the live DVD lovingly documents the historic night when the original members of The Zombies reunited to perform the premiere of "Odessey & Oracle," preceded by a veritable banquet of Zombie connected material, from Argent hits to Colin Blunstone's string quintet material from his beautiful album "One Year."

The DVD begins with 8 tracks performed by The Zombies 'Touring Band', consisting of Rod Argent, Colin Blunstone, Jim and Steve Rodford, and Keith Airey, playing a collection of classic Zombies' tracks prior to 'Odessey...', songs from Rod's later band Argent as well as Colin Blunstone solo material, augmented by a string Quartet.

After a short interval the four remaining original members of The Zombies (Rod Argent, Colin Blunstone, Chris White, High Grundy) arrive on stage to perform landmark 1968 album Odessey & Oracle in all it's glory and, after an introduction from recording legend Al Kooper (The man responsible for Odessey's existence), kick off with 'Care of Cell 44', instantly letting you know you're in for a treat with it's beautifully escalating harmonies, excelling all expectations when experienced live. This is followed by many further highlights including the layered harmonies of 'Maybe After He's Gone' and 'Beechwood Park', the soaring vocals during 'Hung Up On A Dream' and an amazing performance of 'Time of the Season' heralds a standing ovation before they close with their much loved debut hit 'She's Not There'.

I Love You / Sticks and Stones / Can't Nobody Love You / What Becomes Of The Broken Hearted / Misty Roses / Her Song / Say You Don't Mind / Keep On Rolling / Hold Your Head Up / Care of Cell 44 / A Rose For Emily / Maybe After He's Gone / Beechwood Park / Brief Candles / Hung Up On A Dream / Changes / I Want Her, She Wants Me / This Will Be Our Year / Butchers Tale / Friends Of Mine / Time Of The Season / Tell Her No / She's Not There

Posted by Robert Kinsler at 3:37 PM