She & Him announce first-ever Christmas concerts 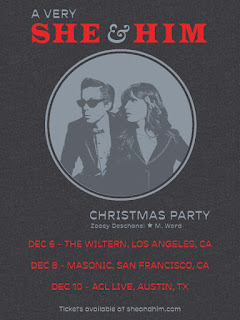 Pretty exciting news for fans of the super-cool duo She & Him...

I first saw She & Him at Coachella and they put on a super fun show. The duo have released two wonderful Christmas albums...


She & Him Announce First Ever Christmas Shows;
'A Very She & Him Christmas Party' hits Los Angeles, San Francisco &  Austin in December

WATCH She & Him's "Winter Wonderland" video HERE
Praise for She & Him:
"Singer Zooey Deschanel and guitarist M. Ward seem perfectly in sync with whatever it is that makes the holiday season so uniquely joyful." - Los Angeles Times
"She & Him, Zooey Deschanel and M. Ward, are relaxing and enchanting...."Christmas Party" is a classy mood setter for You & Me & Everyone." - Associated Press
"...gentle acoustic guitars and Deschanel's honeyed voice (give) a gorgeous, otherworldly air that can make any holiday shindig bearable." - San Francisco Chronicle

Email ThisBlogThis!Share to TwitterShare to FacebookShare to Pinterest
Labels: Holiday Music, M. Ward, She and Him, The Wiltern, upcoming concerts, Zooey Deschanel