Fans of hard rock will want to get the Scorpions' upcoming release (available on both Blu-ray or DVD) "Live in Munich 2012" next month...


SCORPIONS
LIVE IN MUNICH 2012
FIRST EVER RELEASE OF THIS CONCERT FILM
~ON DVD, BLU-RAY, AND DIGITAL FORMATS VIA EAGLE ROCK ENTERTAINMENT~ 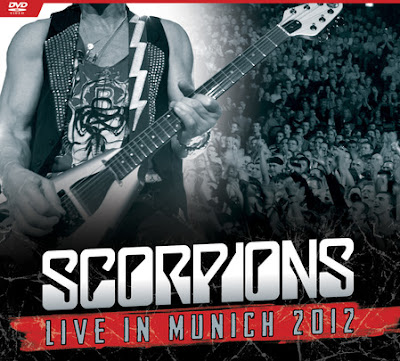 New York, NY (August 25, 2016)--Celebrating their 50th anniversary in 2015, the Scorpions are one of the most successful rock bands to come out of Continental Europe. On September 30, 2016, their never-before-released, jaw dropping and emotional final concert of the Sting In The Tale world tour will be released as the concert film Live In Munich 2012 via Eagle Rock Entertainment. [MSRP $21.98 Blu-ray, $15.98 DVD]
With over 100 million records sold, Scorpions are one of the first rock bands to blast through the barriers and play all over the world, especially in the Far East, Eastern Europe and Russia. They initially struggled to reach a wider audience in their home country of Germany, despite huge success in many other parts of the world. THIS is what makes this concert film Live In Munich 2012 – a homecoming event at the Olympiahalle in Munich on December 17, 2012– so emotional and meaningful.
Scorpions rock like no other, and this live DVD shows just how. Live In Munich 2012 is a high octane performance, captured before a wildly enthusiastic crowd, and serves as further proof of the power and electricity theScorpions bring to the stage!
Showcased in this concert event, the band deliver fiery renditions of their classic anthems: “Wind Of Change”, “Rock You Like A Hurricane”, “Send Me An Angel”, “Still Loving You”, “The Zoo”, “Big City Nights”, “Is There Anybody There?”, “No One Like You”, “Sting In The Tail”, and many more -- all captured in High Definition.
Live In Munich 2012 is a fascinating look at one of rock music’s most engaging, potent and successful acts, which makes this an essential purchase for any Scorpions fan!
Scorpions are:
Rudolf Schenker (rhythm guitar, lead guitar, backing vocals)
Klaus Meine (lead vocals, rhythm guitar, percussion)
Matthias Jabs (lead guitar, rhythm guitar, backing vocals)
James Kottak (drums, backing vocals)
Pawel Maciwoda (bass, backing vocals)
Scorpions - Loving You Sunday Morning
http://www.youtube.com/watch?v=UJE-xT3LbkY
Pre-order here:
DVD: https-//www.amazon.com/#1605461
Blu-ray: https-//www.amazon.com/#160545B
Eagle Rock Entertainment is the world’s largest producer and distributor of music programming for TV, DVD, Blu-Ray and Digital Media. Eagle produces quality HD programs, both concerts and documentaries, directly alongside artists including Imagine Dragons, Paul McCartney, Katy Perry, The Rolling Stones, Pink Floyd, The Who, Queen, and Peter Gabriel. Eagle is a multiple Grammy® Award winner and has received numerous multi-platinum sales awards around the world. Eagle Vision is headquartered in London, and is a Universal Music Group company.
Follow Eagle Rock Entertainment at:
Facebook:  www.facebook.com/EagleRockEnt
Twitter:  www.twitter.com/EagleRockNews