Between now and December 31st, I plan to provide a few lists looking back at my favorite music of 2011. Kicking things off are my top albums of 2011. 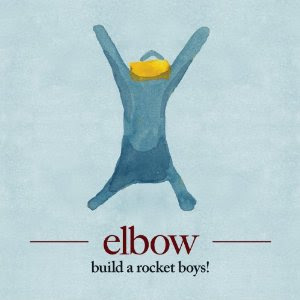 1. Elbow, Build a Rocket Boys!
America is just starting to get familiar with this U.K. export from Manchester. Anchored by the involving “The Birds” and forceful “Neat Little Rows,” this is merely the latest tour de force in a growing list of wonderful masterworks from vocalist Guy Garvey and the band.

2. Glen Campbell, Ghost on the Canvas
If this indeed proves to be his final studio album, the legendary singer-songwriter-guitarist has gone out on top. Campbell, suffering from Alzheimer’s to the point that he’s launched a farewell tour, has somehow tapped into his own mortality to bring his life’s journey to a dramatic close with this set of powerful songs.

3. Radiohead, The King of Limbs
The more subdued electronic textures featured this time may not equal some of the band’s more dramatic efforts, but there is a depth and power to this eight-track disc that reveals its sonic might over time. It’s a dense and challenging album that confirms these pioneering Brits as rock’s most daring and talented modern-day outfit, artfully challenging listeners at every turn.

4. The Zombies, Breathe Out, Breathe In
The oft-underrated ’60s holdovers celebrated their 50th anniversary by releasing one of the finest albums of the year, an amalgam of jazz, pop, rock and psychedelia. Founding members Rod Argent (keyboards) and Colin Blunstone (vocals) continue to deliver the goods live, too. Let’s see if the Rolling Stones and the Beach Boys can pull that off in 2012.

5. Ron Sexsmith, Long Player Late Bloomer
Another fantastic collection of poignant material from one of Canada’s greatest and most original tunesmiths. On this album, guitarist Rusty Anderson (most often seen supporting Paul McCartney), keyboardist Jamie Edwards (who works with Aimee Mann) and drummer Josh Freese (anchor for Devo and A Perfect Circle, among others) add firepower to a particularly fine set of songs.

6. The Civil Wars, Barton Hollow
An Americana folk duo wouldn’t seem likely candidates to score commercial success with young audiences in 2011. But then the team of singer-keyboardist Joy Williams and singer-guitarist John Paul White are no mere minimalist music makers. Their debut is a stirring collection of material showcasing marvelous vocal harmonies and inventive songcraft.

7. Colin Hay, Gathering Mercury
I can’t think of many artists who have issued an album as confessional and honest as the latest from Men at Work’s former frontman Colin Hay. Whether singing about growing older (“Invisible”), losing his dad (“Dear Father”) or performing beautiful instrumental works on his guitar (“Goodnight Romeo”), a sense of overall optimism shines through this moving collection.

8. Fountains of Wayne, Sky Full of Holes
Though the modern-day leaders of the power pop movement are sadly not enjoying the commercial success they deserve, I hope music fans of all genres will give their latest full-length a spin. Few bands in recent memory have released anything as lyrically rich as this; there are songs here that capture the ear with a single listen and never let go.

9. Moby, Destroyed
This time the modern electronic-music pioneer mines the creative reaches of his own experiences to create thoughtful, enveloping material inspired by life on the road, lonely nights spent far from home, and cities examined at their quietest. A reflective album that defies easy description, with “Victoria Lucas,” “Lacrimae” and “When You Are Old” among the standouts.

10. David Serby, Poor Man’s Poem
To hear the emotional and poignant songs that fill this set is to be transported back to the Civil War and the American frontier. But rather than simply offer up a retro exercise in Americana folk, L.A. based Serby compiled 10 original songs that resonate with timeless tales of war, loss and the working poor.

Honorable mentions: the Felice Brothers, Celebration, Florida; The Smithereens 2011; Emmylou Harris, Hard Bargain; Bad Company, Live at Wembley; Social Distortion, Hard Times and Nursery Rhymes; R.E.M., Collapse Into Now; k.d. lang and the Siss Boom Bang, Sing it Loud; Moreland & Arbuckle, Just A Dream. And a special nod to the soundtrack for the new Cameron Crowe film We Bought a Zoo, featuring stunning music from Sigur Rós’ Jónsi (I opted not to consider that excellent disc only because a few of the tracks had appeared on earlier releases).
Posted by Robert Kinsler at 6:52 AM