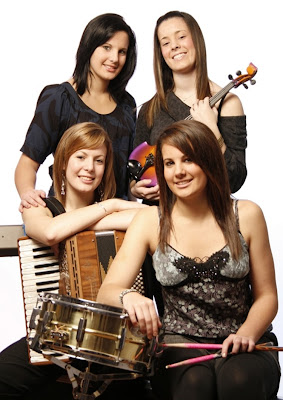 There has always been something special about what happens when siblings make music together. The Bee Gees, Beach Boys, Oasis and Corrs are among the many groups that found success in utilizing talent found in the family tree.
So it should come as little surprise that the four Johnson sisters who make up GiveWay have crafted a unique and accessible blend of Celtic music since they began playing as a professional quartet in January 2002.
GiveWay features Fiona (fiddle, guitar, whistles, backing vocals), Kirsty (accordion, lead vocals), Amy (drums, percussion, backing vocals) and Mairi (keyboards, backing vocals). All are in their 20s.
The sisters have been playing music since they were children, and since forming GiveWay, they have won honors at the Scottish music festival Celtic Connections and at BBC Radio 2's Young Folk Awards. GiveWay has performed throughout the United States and Europe, including at the Cambridge Folk Festival and Glasgow's Royal Concert Hall.
The group will perform two shows Saturday night, Oct. 3, 2009 as part of the Music at the Library concert series in San Juan Capistrano. The shows will be staged at the regional library, located at 31495 El Camino Real. There will be a show at 6:30 p.m. and another at 8:30 p.m.
During the performances, GiveWay will feature songs from its 2002 commercial debut, "Full Steam Ahead," 2005's follow-up, "Inspired," and the July 2009 effort, "Lost in This Song."
For more information, call 949-493-1752 or visit www.musicatthelibrary.com .
Posted by Robert Kinsler at 5:50 PM