Rick Springfield's power-pop as strong as ever in Costa Mesa 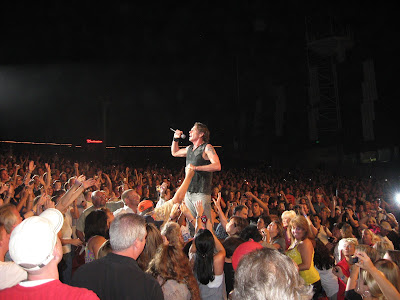 Coming on the heels of performances by Duran Duran a night earlier at the same venue and a Friday night show by New Kids on the Block at Verizon Wireless Amphitheater in Irvine, Rick Springfield’s Sunday night, July 12, 2009 set at Pacific Amphitheatre might have seemed like part of a conspiracy to reawaken the dreams of thousands of nostalgic women.
But Springfield, who turns 60 next month, continues to defy his would-be role as a Tiger Beat heritage act. His 90-minute concert at Pacific effortlessly blended his role as an entertainer who solicits screams from female fans with that of pleasing everyone with infectious power-pop that boasts undeniable singalong choruses.
Although mainstream listeners may have missed it, 2008 marked the release of one of Springfield’s best-ever albums, "Venus in Overdrive," a collection whose songs helped elevate Sunday’s set list beyond the previous two appearances I’ve seen from him in recent years. Opening with the hard-edged “Mr. PC” and immediately launching into “What’s Victoria’s Secret,” Springfield had the audience on their feet and made sure to keep them there for his full 18-song set.
While there are fans who likely thought they were in heaven when a shirtless Springfield came out into the audience and was embraced by countless women during “Human Touch” or pointed to them as he sang “Jessie’s Girl” at the finale of his main act, what set this night apart were actually the musical proceedings.
Playing a mix of radio-friendly rock (“I’ve Done Everything for You,” “Affair of the Heart,” “Don’t Talk to Strangers”) and harder stuff (“Living in Oz,” a cover of Paul McCartney’s “Jet”), Springfield has become a master at delivering a well-paced, rousing show that is bound together by its tunes.
Swapping solos with guitarist Greg Bernhardt, the Australian native impressed on a take of the blues classic “Crossroads.” He also allowed the show to focus on his deeper songwriting and vocal skills, with “Venus in Overdrive” and “I’ll Miss That Someday” blending in with his well-known hits from the early ’80s.
There was a time when Springfield might have been dismissed by critics as nothing but a General Hospital star who used his television fame to help score musical success. Watching Springfield tear it up on stage Sunday night, it’s clear his love of music and a sincere and lasting connection with fans have elevated him beyond the mere Working Class Dog of his youth.
Posted by Robert Kinsler at 3:38 PM